Ten Years of Invasion: The So Called Rescue of American Anglicans, Part I

2000 was the year of the first wave of invasion. It didn't look like much at the time, but there was no question: Rwanda and South East Asia, Provinces of the Anglican Communion had deliberately ordained bishops for a mission to the United States whose task it was to offer an supposed "orthodox" Anglican safe haven to beleaguered Episcopalians, where it was believed the church was involved in what the Archbishop of Rwanda called "spiritual genocide."
It seems an appropriate time to do an assessment of various efforts that have been mounted that involved invasion from other Provinces. The lead belongs to AMiA.
AMiA.
The Anglican Mission in the Americas web pages reports,
"January 29, 2000:  Bishops Chuck Murphy and John Rodgers were consecrated bishops by Archbishops Kolini and Tay at St. Andrew's Cathedral, Singapore and later that year (July 28-29), the Amsterdam Consultation officially created the Anglican Mission as a missionary outreach."
At a later point that mission became a ministry of the Province of the Anglican Church of Rwanda, and so remains to this day.
The Anglican Mission in the Americas was part of the formation of the Anglican Church in North America (ACNA) but finally believed it needed to continue its relationship with the Province of Rwanda, and so is a "mission partner" rather than a member of ACNA.
After then years, what then of AMiA?  It has become a mission not particularly to disaffected Episcopalians, but (to its credit) has casts its nets out to the millions of unreached Americans and Canadians.  There continue to be Episcopalians who make their way into AMiA, but apparently that is not the spear point of the effort any more.  AMiA has become, effectively, yet another episcopal body in North America, but with bishops who are considered part of the missionary effort of an Anglican Province. In practice, it has become another American denomination seeking to attract new members to an Anglican community. 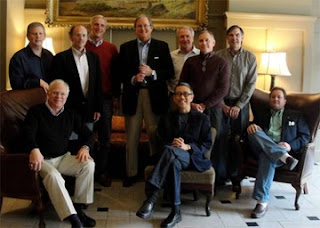 How many people are in the AMiA community? At the moment they claim 152 congregations. These are called "AM Fellowships," a number of these being congregations in formation. AMiA has 10 active bishops and one retired bishop. They constitute a "council of bishops" within the Anglican Church of Rwanda.  Most of these bishops came from The Episcopal Church, and in particular from the ranks of church planters and missionary minded clergy. Whatever their reasons for leaving The Episcopal Church, they are forging a way of being Anglican that is remarkably focused on local congregational development.  I have no clear sense of how many persons AMiA claims as its membership.  In 2009 Anglican Mainstream reported, "The Anglican Mission in the Americas (Rwanda) reports an average Sunday attendance of 21,600 in 180 congregations (40 of which are churches in formation called “networks”)." They now claim 152 congregations. Perhaps the 40 "networks" are in addition to the 152, giving 192. Given the claim that they are growing rapidly, say now 200 congregations. ASA of 21,600 in 2009 - make that 22,500 in 2010, or 117 per congregation.  Well, its hard to say, but if AMiA has the same habits that most churches have, the numbers attending on Sunday are seldom more than 1/2 of the total population of the church. Even given the enthusiasm of a new church and the fact that many members attending a new church may not be "members", where 2/3 might be there on an average Sunday, the total membership in AMiA would look seem to be considerably greater than the 22,500 projected as ASA in 2010. So let's say that represents only 2/3 the number. Then AMiA has something like 33,750 members.
AMiA stresses that it is part of the Anglican Church of Rwanda, which of course means that the Church of Rwanda has clearly spent ten years promoting a better brand of Anglicanism in the United States and Canada, maintaining that The Episcopal Church and the Anglican Church of Canada have lost their way.  The break in communion between AMiA and TEC is evident by Rwanda's insistence that AMiA is a mission of the Church of Rwanda.
AMiA will be whatever it is in the North American scheme of things. One day, when they finally develop an American Synod, and supposing some success in their missionary work, they will be simply and without complications an American / Canadian church. At that point I would hope new conversations might take place about re engagement with The Episcopal Church.  Whatever else we may say I think the AMiA decision to turn its face to the unchurched in North America is on target. Their bishops may have much to say about mission without institutional overhead that we in TEC need to hear. But that will have to wait for a better day.
For now AMiA is some 33,000 folk, with 152 congregations and maybe 40 networks, 11 bishops all members of the House of Bishops in the Anglican Church of Rwanda. In turn the Church in Rwanda is in clear violation of the Windsor moratoria (but who cares any more?), the ancient rule that playing around in dioceses not your own is a form of ecclesiastical invasion and essentially a declaration of war, and just plain foolish.  AMiA bishops may think this gives them a leg up in that they are bishops in a Province of the Anglican Communion, but that cuts very little ice. It might with some stretch of the imagination lead to their being invited with other Rwandan bishops to various Anglican meetings, but probably not.
Was all of this worth it? I think not.  If they had stayed and touted their Anglican wares within the tent, surely these church planters could have done about as well, and maybe might have sent deputies to General Convention, professors to teach and missionaries to preach and more or less influenced the life of The Episcopal Church.
But we will never know. The invasion did happen, and The Episcopal Church did not fold, and AMiA is yet another denomination in the US and Canada.
Posted by Mark Harris at 12/09/2010 12:18:00 AM