Martin Luther King Jr. - a day on, not a day off 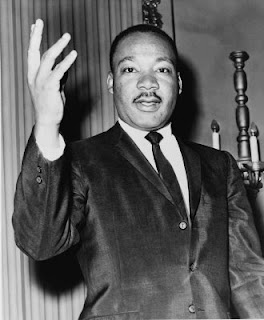 It's Martin Luther King Jr. day. Here in Sussex County Delaware, not quite ready for prime time, we none the less have a coordinated effort to honor Dr. King and to think on the various aspects of his witness and work. Saturday there was a parade here in Lewes, not well attended by either participants or bystanders, but still there it was. That afternoon there was a banquet gathering together all those groups in southern Delaware who continue to work on issues of race, human relations, social justice and social services. Today, Monday, there is a prayer service in the morning and this evening at St. Peter's the third of a four week series "Martin Luther King speaks," hearing again the speeches and letters of Dr. King. 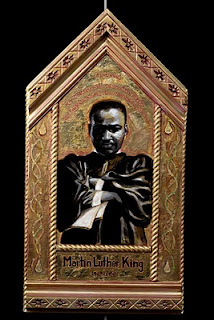 Tonight's speech is the one called "Beyond Vietnam," a difficult speech, but one very much in order today when the US is involved in what appears to be perpetual war, thereby nullifying any real effort to address poverty, education and health care in this country.  It turns out that the United States cannot run two wars, a struggle against a network, and deal with crumbling infrastructure, health care and general well being of the citizens of the US, much less the disasters worldwide. When something has to give it is the poor who take the brunt of the reductions.  Dr. King saw this then, in 1967, and we can see it now. The critique of yet another check marked insufficient funds was damning then, and damning now.
So, it is no time to take a day off. We have to keep the shop open. There is work to be done and time to do it.
Posted by Mark Harris at 1/17/2011 09:10:00 AM