The Global South / GAFCON and an Anglican Future

Primates of Anglican churches belonging to the Global South Anglican group (GSA) met in China recently and produced a communique.  In that communique there was a longish section devoted to the Primate's observations about the Anglican Communion. We'll get to that in a moment.

Who are these people? 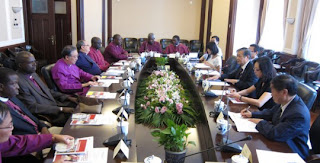 Just to keep it all in order, the GSA group consisted of the following Primates (that's what we Anglicans are given to calling the chief bishop of the several churches in the Communion - it is unfortunate, but there it is.)  The list that attended in China:

Now there is a second organizing group, known as GAFCON, that grew from a conference, The Global Anglican Future Conference, and GAFCON has a primates' council. Those above in RED are the overlap with GAFCON.

GAFCON includes a non-Anglican Communion member in Duncan of the Anglican Church in North America, otherwise all the remaining Primates in GAFCON, save Zavala from the Southern Cone, are from Africa. The GAFCON group also includes the Primates who have defined the Windsor Report's request not to muck about in other's Provinces by ordaining bishops and priests for work in Provinces not their own.

The Global South Anglican group includes Primates Chew, Anis, Ntahoturi, Oo and Chama who represent African and Asian Anglican churches not part of GAFCON. However, GAFCON Primates represent a majority of the GSA body and GSA has been mostly encouraging of the GAFCON project.

It is not surprising therefore that the GSA Communique shares a great deal in common with the Primates Council of GAFCON communique of May 2011. That document can be read HERE.

Now, to the GSA Communique:  There is not much new in this Communique but it has clearly aligned itself with the movement of the GAFCON Primates away from the Anglican Communion as a fellowship of churches linked by the "Instruments of Communion" - the Archbishop of Canterbury, the Lambeth Conference, the Anglican Consultative Council and the Primates Meetings.

Here are the points in PURPLE, with my comments following each section in RED.

11. In our reflections, we found that our Anglican Communion has also undergone a tremendous transformation in recent decades. Today, the majority of Anglicans are found no longer in the west, but in churches in Africa, Asia and Latin America that are firmly committed to our historic faith and order.


12. At the same time, it grieves us deeply to observe many Anglican churches in the west yielding to secular pressure to allow unacceptable practices in the name of human rights and equality. Beginning with the undermining of Scriptural authority and two millennia of church tradition, the erosion of orthodoxy has gone as far as the ordination and consecration of active gay and lesbian clergy and bishops, and the development of liturgies for same-sex marriage.

The GSA primates takes a swipe at "reason" and stands up for "scripture and tradition." It charges that some of the churches in the "West" have placed human rights, laws, and the search for equality, above scripture and tradition."  Well yes and no.  Some in the west have argued that even though scripture condones execution for various crimes, we ought to stand against capital punishment.  But in the west we still have occasions where executions are not only condoned but apparently delighted in. So even in the belly of the beast, in the US, there are still holdouts for scripturally condoned executions. Most of the two mellennia of church tradition has condoned slavery. In a variety of forms it is still in existence. Surely GSA is not suggesting a return to that?  No, of course not.

The GSA Communique has little to say about such matters.

What they mean is clear. They are talking about inclusion of gay and lesbian people in the sacramental life of the church. "The erosion of orthodoxy has gone so far as the ordination of active gay and lesbian clergy and bishops, and the development of liturgies for same-sex marriage."  Well, I'm glad they made that plain!  We never would have know otherwise.

So what they are arguing is that actions that were condoned, tolerated and not confronted in Scripture or history, are OK even if most of GSA and most of the rest of us would stand opposed to them, and are not the basis for division in the church, but things that are argued were not condoned by scripture or most of Christian tradition are never to be allowed.  So if it was prohibited by Scripture or Tradition it stands. If it was condoned and practiced, we  can chose to follow or not.

13. We are wholeheartedly committed to the unity of Anglican Communion and recognize the importance of the historic See of Canterbury.

No they are not. And they recognized the historic importance,not the actual importance, of the ABC. (See below.)

Sadly, however, the Anglican Communion’s Instruments of Unity have become dysfunctional and no longer have the ecclesial and moral authority to hold the Communion together.

So, The ABC (one of the instruments) does not have the ecclesial and moral authority... But maybe they think he is the focus of unity....I think not.

For instance:
13.1. It was regrettable that the Lambeth Conference 2008 was designed not to make any resolutions that would have helped to resolve the crisis facing the Communion.

That would have been the Archbishop's final decision, yes? So according to GSA, he failed.

That would also have been the Archbishop's failing. Its his fault.

So the reason these groups fail the test is because they ignore the things they are upset about and they don't want to have to go to meetings representing a minority opinion or ones that are not being responded to adequately in their minds.  Now its not only his fault, its their fault.

14. We have devoted much time to discuss the Anglican Communion Covenant and the Preamble by the Province of South East Asia documenting the historical events leading up to the Covenant and insisting that the Primates should be the proper moral and spiritual authority for the monitoring of the Covenant. The Covenant with the Preamble have been commended to our respective Provinces for further study and decision.

They discussed the Anglican Communion Covenant, etc. but seemed to take the lead from the Province of South East Asia and insist that it be changed. Interestingly it is the Province of South East Asia's "preamble" that is being circulated with the Covenant. Its a package deal. They are apparently locked into the idea that the Primates are the body with the "proper moral and spiritual authority" for monitoring the Covenant. That is, the Covenant as currently constructed must be changed.  Blame the ABC, the ACC, and the miserable influence of the West, etc.

15. We are committed to uphold the apostolic faith and traditions that define us as Anglicans. This commitment compels us to adopt a proactive stance with respect to our common mission and witness.

The term "apostolic" now shows up.  What this means is that the GSA is grabbing the brass ring on this marry-go-round. They are out to show that they not only have the real, true and viable "historic faith and order" but they are apostolic.  So they are not any more the product of division (as in the Reformation) they are the true source church, you know "apostolic."

15.1. We are planning a Missions Consultation with the theme “Decade of Mission and Networking” as proposed in the Fourth South-to-South Encounter, as a unifying vocational platform on which we realize and build up our common life and witness. Orthodox Anglican churches and groups will be invited to join hands with us in missions.

Well their turn. The Anglican Communion tried a decade of evangelism and that was no great winner. Better luck with "mission and networking." Decades are markers for sales pitches. Didn't like it then, don't like it now. At the same time, to give them credit, the relationship between mission and networking has some merit. The problem is, I think this is code for building up a new Anglican Order based on the Jerusalem Declaration and a revised standard Anglican Covenant.

15.2. We commend the initiatives of theological education carried out in some of our provinces to strengthen the theological foundations and deepen theological reflection among future leaders of the Church.

Actually, right on with this one. Theological reflection takes place in a world much larger than the vision of the GSA primates, and some of the work being done in the Global South is very important indeed. So, go for it.  Too bad the Anglican Communion initiatives are not mentioned here, but there it is.


15.3. We are developing economic empowerment strategies and networks to enable churches in the Global South to be more economically self-sustaining using the resources God has blessed each of our nations.

Again, these strategies are of great importance. I hope there is wide consultation among churches, South and North (or is it South and West), because economic self-sufficiency is an across the board issue.

15.4. We are committed to support faithful orthodox Anglican churches and groups in the west which share our historic faith and order.

Well, we thought so. Churches like ACNA and AMiA in the US and Canada, AMiE in England, and whatever it is in Brazil that involves the deposed bishop of Recife,  you know, churches and groups like that.  What GSA means is that their alignment is with what they consider "orthodox" churches in the global south  (to bad Brazil) and the realignment crowd in North America and now England.

So what does this all add up to?  The Global South Anglicans and the GAFCON crowd are hand in glove. They seem pretty clear about it all:

(i) The Anglican Communion as now constituted is defunct, they don't like it and they are not going to go there any more.
(ii) The Archbishop of Canterbury was useful, but is not any more.
(iii) The Primates ought to be the central body in a newly constructed Anglican Communion and that body ought to be purged of Primates of churches that have gone astray. If they can't get the votes in the current line up to do that, the truly "apostolic" Primates will meet separately (as in the GSA meeting).  But for sure, when the new improved Primates meetings take place they will decide who is in and who is out of the Communion.
(iv) GSA Churches will not approve a Covenant that does not make the changes they wish.
(v) They will turn away from The Episcopal Church, the Anglican Church of Canada, and perhaps even the Church of England, and towards "orthodox" groups in those areas of the world.

Now, explain to me again how they are in any way concerned "wholeheartedly" for the unity of the Anglican Communion?