Canon Giles Fraser, The Best of what we can be.

Canon Giles Fraser, a wonderful Christian, a powerful voice for inclusion, and an all around great guy, has done it again: He has protested the removal of Occupy London folk from the doorsteps of St. Paul's Cathedral in London. I have been honored to know him through the work of the Chicago Consultation where he was a strong presence. Here is the full Episcopal News Service story: 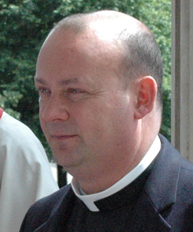 The Rev. Giles Fraser has resigned as canon chancellor of St. Paul's Cathedral in London because senior clerics at the centuries-old religious institution allegedly support legal action to remove the Occupy London protesters who've camped outside since Oct. 16. "It is with great regret and sadness that I have handed in my notice at St. Paul's Cathedral," Fraser said in a Twitter post on Oct. 27 after informing the cathedral dean and chapter of his decision. A former vicar of Putney, he assumed his cathedral position in June 2009. The Guardian newspaper subsequently quoted Fraser as saying that he'd resigned "because I believe that the chapter has set on a course of action that could mean there will be violence in the name of the church."

St. Paul's Cathedral has since Oct. 21 been closed to visitors and worshipers for the first time since World War II because of what it called health and safety risks posed by the protesters. The cathedral, which reportedly is losing up to £20,000 ($31,000) for each day it remains closed, said it will reopen with a lunchtime service on Oct. 28 now that "staff have been able to deal with a list of safety concerns."

The protesters have said they've honored all requests from cathedral and city authorities to ensure that the camp is orderly, doesn't block any building entranceways and complies with health and safety standards. The City of London Corporation on Oct. 26 issued a statement saying that it was seeking "the full range of options — including court action" to clear protesters, a move senior cathedral staff reportedly support.

When the protesters arrived on Oct. 15, cathedral staff took a different stance, which Fraser has maintained. On Oct. 16, Fraser said that he supported people's rights to protest peacefully, and he asked the police to leave the building "because I didn't feel it needed that sort of protection."

In a statement released by St. Paul's press office, Cathedral Dean Graeme Knowles said that Fraser "has brought a unique contribution to the life and ministry of St. Paul's, and we will be very sorry to see him go. "He has developed the work of the St. Paul's Institute and has raised the profile of our work in the city," Knowles said. "We are obviously disappointed that he is not able to continue to his work with [the] chapter during these challenging days. We will miss his humor and humanity and wish Giles and his family every good wish into the future."

The process to appoint Fraser's successor will begin soon, the statement said, noting that the post of canon chancellor "is a crown appointment," meaning that the queen would need to ratify any candidate chosen by a nominations commission.

Diocese of London Bishop Richard Chartres said that he "heard, with regret," the news of Fraser's resignation. "His is an important voice in the church, and I have offered to meet him immediately to discuss how we can ensure it continues to be heard."

The London protest, calling itself the Occupy London Stock Exchange, is part of a worldwide demonstration of anger against economic injustice and greed. The campaign originated in New York, where Trinity Episcopal Church posted a statement on its website Oct. 5 inviting Occupy Wall Street protesters to use the congregation’s facilities and staff for rest, revitalization and pastoral care.

The protests, begun in New York on Sept. 17 and inspired by the Arab Spring movement, have spread to more than 2,100 locations, including other major cities such as Chicago, Miami, Vienna, Paris, Berlin, Rome and Tokyo.

Well, there it is then: Fraser has done a remarkable thing in a world where too many hold their positions too dearly. He has, of course, only solidified his position as (as MadPriest would say) BRICK OF THE DAY.  Thanks be to God for such witness.