Hopefully all across Episcopal land people are turning towards the Light that enlightens us all, and putting aside blogdom (including this blog) for BETTER THINGS.

Still, we might note a week before Christmas, that matters continue a-pace in Episcopal-Land.  Decisions about who owns property and how it is used are being made right up to closing time. For some it is a time of joy, and for others it is a difficult Christmas indeed. 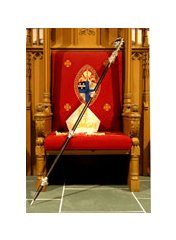 Meanwhile in the Diocese of Quincy legal matters have taken a turn for the more complex. The judge has determined that the matter of who has property rights in the Diocese of Quincy - those who have moved on to the ACNA (Anglican Church in North America) world, or those who are still the Episcopal Diocese of Quincy - can not be settled without a trial.  The ruling doesn't solve anything but it makes it clear the struggle for ownership will not be solved easily.  Over at the Anglican Curmudgeon there is an analysis (I don't know how good) but it is an interesting read. It is titled,  ECUSA Denied Summary Judgment in Quincy: Court Finds a Triable Dispute Whether Church Is in Fact "Hierarchical"  His Curmudgeonly self's, titles match my own for length.

Out there in the Anglican universe there are reports that the Province of Papua New Guinea has adopted the Anglican Covenant. Their approval was accompanied by a letter to the Secretary General of the Anglican Communion in which they wrote,

“Communion”, in our understanding, describes a particular kind of close relationship which both ensures autonomy and requires responsibility. It is an expression of the fellowship of the Holy Spirit and as such is a precious gift to God’s people. It clearly requires mutual respect, open communication and patience in dealing with issues that threaten it. In recent decades we have been saddened by the apparent lack of these things in the controversies concerning the ordination of women and issues of human sexuality.”

He went on to say that the bishops felt it was important to remember the need to pray for unity beyond just the Anglican Christian tradition. “Anglicans are only part of the wider Christian “communion” that is the Church of God, which must have an important role in discerning the truth. Anglicans, we believe, have been called to live a particular style of Christian witness which, because it is less juridical and confessional than that of some others, clearly requires a high level of mutual concern and respect.

Bp Ramsden concluded, “Meanwhile, Anglicans in Papua New Guinea are proud to belong to the Anglican Communion. As bishops we attended the 2008 Lambeth Conference, supported the three moratoria, endorsed the covenant process and value the efforts of the Archbishop of Canterbury to promote our unity. The Covenant might not have been proposed if some Anglican Provinces had not acted in the way they did, but recent history has produced it and we believe it deserves our support as a contribution to shaping and strengthening a future Anglican Communion, faithful to our calling to be ‘eager to maintain the unity of the Spirit in the bond of peace’ (Eph 4.3).”
The letter comes from what apparently is the "calm middle," those churches that have taken part in the full life of the Communion and have not wandered off to GAFCON land, but on the other hand have seen nothing unwarranted in the slow pace of change in the Communion. But here is the problem: the patience called for, had it been applied to the matter of the ordination of women, would have meant a much slower process in The Episcopal Church for the ordination of women in general and in the episcopate in particular. The patience, as called for in matters of the ordination of gay persons or the blessing of gay relationships, would mean that there would institutional silence and no movement, except the movement out of The Episcopal Church of the very best and most personally integrated gay and lesbian members of the church.

Papua New Guinea did what was asked: they considered the Anglican Covenant and found it good enough, and they make it clear that they wish to be loyal to the Anglican Communion. Fair enough.  I believe they are wrong in this, but they did what was asked. In the score keeping that is done by the No Anglican Covenant there has not been an update to reflect this yes vote. This would bring to four the confirmed yes votes, with two others (Ireland and South East Asia being effective yes votes as far as the head office is concerned), making six. There is only one confirmed no vote, the Episcopal Church in the Philippines, but a number of unhappy emoticons.

The letter is very simple and straightforward.  The statement from the bishops is a reiteration of their position taken at Lambeth 2008 . Here it is, from Episcopal Cafe (highlighting mine):

The House of Bishops of the Episcopal Church of the Sudan in its meeting held in Juba from 14-16, November 2011 in the context of General Synod has reaffirmed the statement of the Sudanese Bishops at the Lambeth Conference in 2008 as quoted below:

“We reject homosexual practice as contrary to Biblical teaching and can accept no place for it within ECS. We strongly oppose developments within the Anglican Church in USA and Canada in consecrating a practicing homosexual as bishop and in approving a rite for the blessing of same-sex relationships.”

We are deeply disappointed by The Episcopal Church's refusal to abide by Biblical teaching on human sexuality and their refusal to listen to fellow Anglicans. For example, TEC Diocese of Los Angles, California in 2010 elected and consecrated Mary Douglas Glasspool as their first lesbian assistant Bishop. We are not happy with their acts of continuing ordaining homosexuals and lesbians as priests and bishops as well as blessing same sex relations in the church by some dioceses in TEC; it has pushed itself away from God's Word and from Anglican Communion. TEC is not concerned for the unity of the Communion.

We will not compromise our faith on this and we will not give TEC advice anymore, because TEC ignored and has refused our advices.

The Statement does not reference Lambeth 1998 on Human Sexuality but to its own independent statement at Lambeth 2008.

It charges that The Episcopal Church is not concerned for the unity of the Anglican Communion, a charge that is not at all true. Many of us are indeed concerned and it is precisely our concern that has led us to question the usefulness of the Anglican Covenant while at the same time affirming the value of the foundational "supports" for Anglicanism.

It declares that ECS will not work with The Episcopal Church on a church wide level, on the assumption that we are not orthodox or faithful. It will work with the Anglican Church in North America, whose leadership has consistently shown a failure to exercise the ministry in The Episcopal Church for which vows were taken and promises made, whose leadership has been deposed by legitimate Anglican authority, and whose church is outside the community of churches that makes up the Anglican Communion. The Bishops statement is careful to say that their recognition does not imply anything about ACNA's relationship to the Anglican Communion. But they are following the line of GAFCON Churches and simply developing an alternative Anglican world in slow incremental steps.


The end of the statement is a bit odd: "we will not give TEC advice anymore, because TEC ignored and has refused our advices."  My sense is what they mean by this is that they do not intend to be part of meetings in the Anglican Communion where TEC folk are present on the grounds that the only possible conversation between the two churches would be one of conversion - TEC converting to what they believe to be the "orthodox" position on gay and lesbian participation in the life of the Church. Since we obviously are not doing as they advise, they will not do that anymore.

They will then be numbered among those churches who will boycott meetings where TEC is present and engaged - not going to Primates meetings, not participating in ACC - or alternately they will go only if the meeting begins by voting TEC representatives out of the body.

If this is not what they mean, then it is mostly a statement of hot air.  If it is what they mean it is yet another step towards a breakup of the Anglican Communion.