Of Commitments, great and small.

The last few days of 2011 and the first day of 2012 brought news of commitments refreshed and new, and the passing of a friend committed to campus ministry. 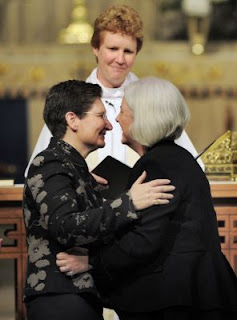 Yesterday, January 1, 2012, at midday, dear friends, Drew Fennell and Lisa Goodman entered a covenant of holy and civil union. Civil Union because in Delaware as of yesterday, persons of the same sex are able to enter a legal relationship whereby their to lives and holdings are wedded (pledged) to one another. Holy Union, because they asked the Church to bless the civil union and them and their family and asked the minister to witness and declare that they were so joined and to bless them. We were among the 400 or so people there to respond "we will" (a grand shout) when asked, "Will all of you witnessing these promises do all in your power to uphold these two persons in their covenant of holy union?"


Kathryn and I were present, and I took part in, Lisa and Drew's commitment service (unaccompanied by any legal resource) many years ago now and it was wonderful to be with them again where their commitment could carry social and legal weight as well.


The service was in the context of the single service for the three congregations related to Trinity Church, Wilmington,(Trinity, Old Swedes and the Hispanic Congregation) at 12 noon. It was "regular church" on a Sunday morning combining The Feast of the Holy Name with the celebration of the Union of Lisa and Drew. The Rev. Patricia Downing, Rector, presided and U.S.Senator Chris Coons gave the sermon. 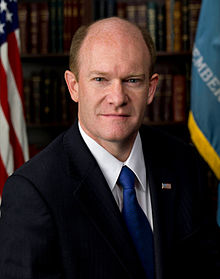 It was a stunningly fine service, the preaching was extraordinary and the couple and family radiant.  Senator Coons' sermon was profoundly theological (he as a Masters from Yale Divinity School). It was finely crafted and wonderfully preached, and he brought into focus the clear relationship between the prophetic pointers towards love and justice and the legal and political aspirations towards inclusion as a means of distributing justice in the real world. I am looking forward to the transcript of his sermon. 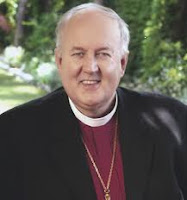 Yesterday as well the resigned bishop of the Diocese of the Rio Grande, James Steenson, resigned and now a Roman Catholic Priest, has been named the Ordinary for the Personal Ordinariate of the Chair of St. Peter in the US. What this is all about is well explained over at CrustyOldDean's column "An Ordinariate Less Ordinary?" An interesting essay on VirtueOnline also fills in details of the meaning of all this.

Steenson had the honesty and the integrity to ask permission to be relieved of his commitment to the ministry of bishop in The Episcopal Church and then to leave. Others have found that difficult to do and simply stuck around until retirement, then retired and pension in hand left The Episcopal Church for Rome or elsewhere (Anglican Church of North America, etc.)


Now he is a Roman Catholic Priest and the "Ordinary fo the Ordinariate."  Apparently this means he will be bishop in all but name, having oversight on behalf of the Pope, for those clergy who leave The Episcopal Church for Rome. I hope his integrity holds in this more troubled context. As Crusty Old Dean remarks, the trouble with the Ordinariate is this:

"Cardinal Kasper, the head of the Pontifical Council on Promoting Christian Unity, said in 2009 that the establishment of ordinariates is not "fishing in an Anglican lake."
This is partly true; they are not fishing in the Anglican lake. They want to drain it.
This is the real concern here, not the handful of schismatics who will join the Ordinariate. It is the profoundly un-ecumenical direction the Roman Catholic Church seems to be taking."

Bishop Steenson is moving into deep waters. Whatever his new commitments, he drank from the waters of Anglican and Episcopal streams and now he is the representative of a Pope who seems ready to try to drain the lake into which these streams feed. One day Fr. Steenson may wonder why he is thirsty again and there is no relief.

And finally, sad news of the death a committed and wonderful priest of the Church and long time Campus Minister,  John Crocker,Jr. Several snippets towards a bio:
From xlebris:


John Crocker, Jr., a former Navy pilot and retired Episcopal clergyman has spent most of his professional life as a college chaplain at Brown University (1958-1969) and at MIT (1969-1977). He was also rector at Trinity Church, Princeton, New Jersey from 1978-1989. Educated at Harvard College and the Episcopal Theological Seminary, Cambridge, Mass., he also received an honorary M.A. from Brown University.

Crocker was thirty-two years old, one year out of seminary, the curate at Trinity Church, Boston, and just ordained a priest in 1955, with the job of ministering to students in the Back Bay area when he met Tom Govan. Crocker realized “Here was a man who had a beautifully integrated understanding of life which was woven out of his experience and study, which included an understanding of economics, politics, philosophy, government, American history and its meaning, all held together and energized by his Christian faith. God was real for him and mysteriously active in it all.”

Intrigued and challenged by Govan, Crocker became his lifelong friend. Later Crocker was given all of Govan’s papers including his books, essays and letters in order to write this biography. This book is a longstanding promise fulfilled.


The Rev. John Crocker, Jr., came to Trinity in 1977 from the Episcopal chaplaincy at MIT and served until his retirement in 1989. His tenure included expanded outreach, consolidation of the many liturgical changes of the preceding years, and planning for needed facility improvements. 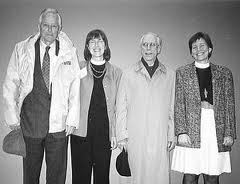 There will be a full obituary in the Boston Globe tomorrow, and a memorial service on Monday in Cambridge. I've been trying to find some pictures of John. Both of these are, I believe, of him.  The one on the left is of former MIT Episcopal Chaplains, the one on the right is of him as a young seminarian.

The reasons for marking his death are many, but for me the major one is that John was committed to Campus Ministry and saw that ministry against the larger backdrop of The Episcopal Church on a local, diocesan and church wide level. As a result his insights about how to further the work of this important ministry at times when interpretation of our work was so central were crucial.

As a young(er) chaplain I found him to be a amazingly supportive elder and wiser companion.

The folks of The Episcopal Society for Ministry in Higher Education (ESMHE) have been remembering him these past few days.  I hope his contributions to the life of the church are documented as a witness to a full life of Christian service.