For the future of the Episcopal Church and the Anglican Communion, Subsidiarity is a bad idea.

Subsidiarity has been touted as a principle in the Windsor Report, by which matters that can be dealt with on a "local" level should be dealt with there, and matters that implicate the whole of a church and or all the churches in the Anglican Communion require a different level of engagement.

Subsidiarity sounds vaguely democratic, allowing congregational and diocesan latitude on matters that don't require regulation to provide uniformity in faith and practice. And, on first read it all sounds very very Anglican. In all things not understood as essential to the faith there can be local difference.

So subsidiarity works just fine in a system where lay people collect around a priest, priests and deacons around a bishop, bishops around a primate, and so on. On each "level" decisions get made by reference to the body that surrounds them, which is why lay people get left out of so much - they are only there as constituents, as part of the networking community, in the first instance - the parish. It also explains why bishops are so often mentioned in the Proposed Anglican Covenant: bishops (including archbishops) 13 times, priest 1, deacon 1, lay persons 3.

Subsidiarity as an idea has also found its way into the thinking of the Episcopal Church about budget priorities. 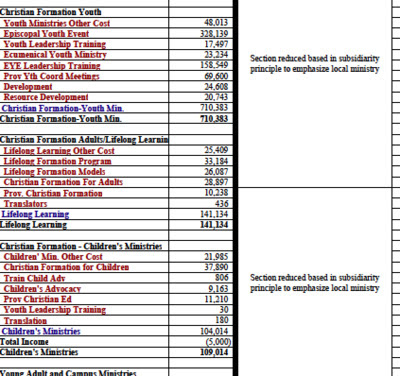 What does the notation, "section reduced based in subsidiarity principle to emphasize local ministry" mean?  It seems to imply that the reduction is a positive decision to return both the work and its funding to a more "local" level.

Had there not been the need for budgetary cutbacks, this subsidiarity principle would not have been invoked. Still, the notion that work and funding ought to be energized at a local level appears on the surface to be a good idea.

There are problems of course. The inverse of subsidiarity is an assumption of organizational hierarchy - in which there are some decisions, actions, funding, support, control, etc, that must be exercised on a "higher" level.  So subsidiarity assumes a limitation on local action, with higher levels of authority exercising regulatory responsibilities. And, in a perverse dynamic of such systems, the signal is that if local work does not require hierarchical regulation it is not of church wide importance.

Thus in the budget cuts some who are involved in profoundly important ministries on a local level - youth ministry, higher education ministry, christian education - perceive that they are devalued by a hierarchical system that no longer believes it has to regulate, organize or co-ordinate that work. And the proof, if needed, is that these ministries indeed seem to drop from the scope of those at the higher end of the subsidiarity system.


The whole subsidiarity idea is in for a surprise. At its core is a notion of "levels" in the organization of the church. And along with that there is the naive notion that networking on a local level poses no real threat to the hierarchical system itself.

Well, dear friends, when various ministries are invited to do their work on a local ministry level it will not be long before these local ministers begin to network and organize for common support and a place in the sun. And in a network world that is no longer "hubbed" - with networking happening through some central clearing house (think main-frame computer with workstations) - but neural, three-dimensional, global, the hierarchy assumed in the notion of subsidiarity will fail. The network will look more like this, the map of the internet: 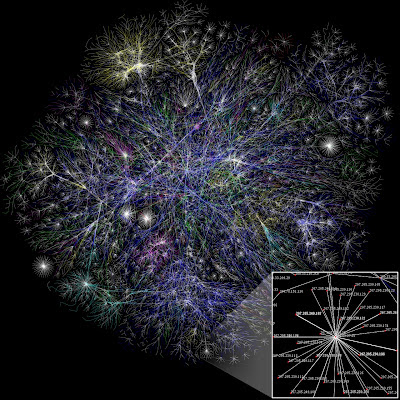 And then a new engine might be loosed on the ecclesial land.  If the "local" organizes for support and encouragement not only horizontally but more three dimensionally, drawing in lay and clergy support from all levels, and networking in this more global way, church organization will profoundly change.


We may well still have orders - lay people, bishops, priests, deacons. We may still look to particular offices or people for guidance and wisdom, but we will look wider as well, and "local" will mean not "lower" but "present."

Suppose, for example, campus ministry organized, not with a central church officer at the hub, but with students, teachers, campus ministers, various bishops, the odd primate, perhaps some members of Executive Council, and on and on, representing a global collection of concerned people in the church.  If those gathered around this work all affirmed their engagement - were present - then indeed the engine would be greater than any church wide office could provide.

And no one would talk of subsidiarity again.