Anderson, President of the House of Deputies,"Until the gavel goes down on July 12th." 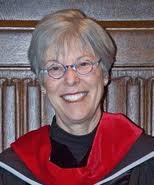 The President of the House of Deputies, Bonnie Anderson, has announced today that she will not seek re-election as President of the House of Deputies at the next General Convention. This came as some surprise. She brings such energy to the Executive Council and such continuing attention to the issues of the church, the development of leadership, lay and ordained, and such commitment to the life of the church that it is hard to think that she might step down. But there it is.

True to form she is clear to say that she remains President of the HoD until "the gavel goes down on July 12th."  No lame duck here.  It's hard to imagine her being a lame anything, not to mention a lame duck. She has done her work with gusto, often taking issue with the "episcopal" bent to the workings of the church, arguing for leadership drawn from all orders, widely diverse, and greatly transparent. She may be ready to move on, but she is not abandoning the work.