The current State of Affairs in the USofA and The Episcopal Church.

Preludium was mostly shut down these past two weeks by the invasion of realities that both delighted and exhausted. Life lived fully is the best answer to the mind and heart numbing muck up in the political and religious lands we inhabit.

We spent ten days with a six year old and a two and a half year old, grandchildren extraordinaire (of course), and that was proceeded by five good days with members of the Philippine Independent Church (PIC or IFI) and two days with Executive Council where I attended my last EC meeting as a member.  Those two days were both frustrating and poignant.  It was an honor to serve on Executive Council but I cannot say that I am sad that my term is up. The last several meetings were difficult.

So here it is a bright sunny day in Lewes, the little town on the bay by the big water, and I am playing a little Warren Zevon to provide a bit of a beat to accompany the joys of spring.  Of course Zevon is mightily depressing, so of course my mind wanders to the question:  where do things in Anglican Land and other realms stand?

Where do things stand in the good ol' USofA?

1. First off, about the realm called the United States of America - I think we are in the midst of a nervous breakdown. We are beginning to realize that the American Dream and the American realities don't match. Zevon found words for this growing realization in his song, "Disorder in the House."

Disorder in the house
I'll live with the losses
And watch the sundown through the portiere."

Wonderfully creepy, yes? And it seems to match the situation.

That, or perhaps even better and simpler, Allen Ginsberg's comment in his Independence Day Manifesto, "No one is in real control. America is having a nervous breakdown." He wrote that in 2000, echoing his feelings from years before, and prophetically the truth for these years as well.

And in this nervous breakdown we are off to hold an election of a President, a full House of Representatives and a third of the Senate, not to mention all sorts of Governors, Mayors, and other honorable folk, and they, like most of us, have been rendered speechless by virtue of the fear that breakdown brings. Paranoid and simplistic voices that call the President socialist, so laughable that we should cry. So fearful are the voices that the President in turn dares not be an actual socialist and dares not laugh in their faces because he too knows just how much the sellout has taken hold even in his own mind.

We are thundering down a road to a land where those who seek prophetic solace will once again read Isaiah and Jeremiah and Marx in one breath, find Jesus again and conclude with Che that "the true revolutionary is guided by a great feeling of love".

But for now everyone will worship the middle class, no one will mention the poor very much, and we will avert our eyes from the reality that America has become the great refuge for shameless greed.  For now, "Even the Lhasa Apso seems to be ashamed."

I am sick at heart for this place of great promise unrealized.

And with that as the backdrop, what about The Episcopal Church? 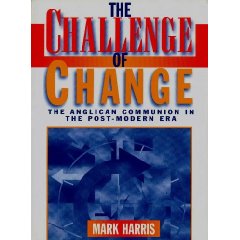 Preludium exists as a blog precisely because it was this writer's sense some fifteen years ago that The Episcopal Church and its part and life within the Anglican Communion was undergoing massive change and that the challenge of that change would lead to a new way of thinking of the Communion and a new way of thinking about being "church." So I wrote, "The Challenge of Change: The Anglican Communion in the post modern era." Following that, and with the encouragement of Louie Crew and others, I began to write for his blog pages and for The Witness, and in 2005 I began writing Preludium.

I mostly got it right, but not without a major failing. While I wrote about the terrible events of 9/11/ 2001, about the mad and sad wars in Iraq and Afghanistan, about the fears and new political ultra nationalism, and about the end of any pretense to end poverty in this country, I did not dwell much on the way in which the last 10-12 years of life in America has influenced just what The Episcopal Church is about and why we too have shared in the nervous breakdown that is America.

We are about to hold General Convention 2012, the every three year meeting of Episcopal Church deputies and bishops from all over the church in what is meant to be the "assembly" of the whole church. With all our efforts to insist that a church wide assembly in the Episcopal Church is larger than an assembly of US based dioceses, its agenda will be almost entirely determined by US based interests and concerns.  The nervous breakdown that is America will have its mirror in General Convention.

There is no question in my mind that fearless and good people will gather and we will explore with honesty and clarity differences among us, will work out ways to find a mind of the church as much as possible.  As we always do we will find a way to express in prayer and blessing various aspects of our common life.

But on two matters in particular we will fall short of our best possibilities:  The Anglican Covenant debate and its conclusion will be unsatisfactory and the matter of restructure of the church's ecclesial life will remain mostly unattended.

That is because we lack a sense of purpose in the larger realm of civil and religious concerns.

We lack any "manifesto" that speaks to the nervous breakdown that is America and that permeates all of America's institutions including the churches, and in particular The Episcopal Church. We live in the same culture of fear that IS America in these days and it is no wonder that friends and foes alike the world over are wondering just who we are.

The Anglican Covenant is no manifesto and the Restructuring proposals are no call to real and specific vision nailed down and made real. That is their problem.

How can we vote Yes on a Covenant that does not, cannot and is not even meant to address, the culture of fear that permeates all of life here, and I would submit, most everywhere in the greed thick parts of the world?  How can we make any kind of restructure that addresses new life after death when we are still afraid of death?

Che Guevara was wrong as could be on some things, but it wouldn't be bad to think that if God is love and those who abide in love abide in God, that real revolutionary thinking would itself be guided by great feelings of love.

Allen Ginsberg set his queer shoulder to the wheel and so must we all, but he also set out to make America a place where poets and vision were part of what made the wheels turn.

And he said about all our squirming around and avoidance, "Only those who have entered the world of Spirit know what a vast laugh there is in the illusory appearance of worldly authority. And all ... at one time or other enter that Spirit, whether in life or death.

I believe it is time for The Episcopal Church to find voice for a Manifesto, one line of which, I would like to submit is this, "We must be a community of poetic sensibility."

I have written before on a notion of a manifesto for the Episcopal Church. Perhaps it is time to write again.

Then again, I can always visit with the young, the very young, who have not yet learned to be afraid. From them I might learn how to write plainly and without fear.