Who should be a candidate for President of the House of Deputies and why?

The British have a lot at stake (at least in some eyes) in just who the next Archbishop of Canterbury will be. An online betting board gives the odds for various candidates. Pattypower posted the following up to date odds HERE. For your convenience I have clipped today's betting odds. Check back with Pattypower regularly, if interested. 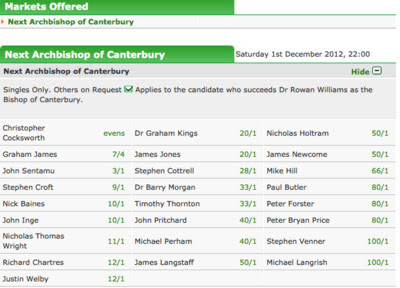 The esteemed Elizabeth (not the Queen if England but Elizabeth Kaeton, Queen of all Coastal Sussex County) suggested a close look at the candidates. The serious ones mostly seem evangelical and a tad reactionary, although I can't pretend to know the bunch very well.  I am distressed that Peter Price, an old friend, is listed as 80 to one.  Some of the names remind me that the English still retain an edge on, well, very English names.... Cocksworth, Inge, Croft, Welby, Langstaff, Langrish.  It is England, for sure.

Over here on this side of the great waters we have a less well known race at hand, one that is of no great interest to anyone outside the world of American Episcopal ecclesiastical politics.  But the results of this election can be quite important beyond the immediate realm of General Convention.

I am speaking of course of the upcoming election of a President and Vice President of the House of Deputies.

Dr. Bonnie Anderson announced last week that she was not going to run for President again. Her reasons were clear and there will be, I suspect, considerable analysis of other grounds behind the grounds for leaving. But there it is. She will not be running.  Dr. Anderson was highly effective, a good communicator, vitally interested in the life of the church, and able to zero in on any affront to the rather careful way in which the Episcopal Church orders its governance to make sure that the voice of lay and ordained persons are heard and balanced. She pushed back at the general ecclesial tendency to believe bishops are at the top of a hierarchy of "ministries" as well as orders of the church.

There are good reasons for that tendency. All ordained persons are bound to the godly advice and admonitions of their bishops as well as the directions that come from them. And lay persons, who take seriously the pastoral and teaching role of the ordained, are sometimes prone to extending this to the prophetic and other ministerial roles that pertain to all baptized persons.  So Dr. Anderson made it clear that hierarchy was not the last say in how decisions were to be made and the community of the church was to be guided. It is and was a vital task.

By a quirk of history and / or the work of the Holy Spirit,  the Vice President of the House of Deputies, Brian Prior, got elected bishop, leaving the position of VP vacant.  It was decided to leave that position open until General Convention where Dr. Anderson would propose the election of a VP who would not stand himself for reelection for either President or VP but serve for the duration of the Convention only.

The situation we face then is an entirely open election. There will not be an incumbent in either office.

Assuming that Dr. Anderson was running, there was little talk of anyone mounting a campaign against her (hard to imagine that). There has been little talk of who is for VP, except that, noting that Dr. Anderson is a lay person, and if re-elected the VP would have to be ordained (canons so state).  Certain names were beginning to bubble up, but without much conversation attached.  One person I spoke to believed that the candidate for VP would have to be male for balance. But there are not many rumblings.

Now there is a fully open slate. All that is required is that following the election of a President the Vice President must be of the "other" order - lay or ordained as the case may be.

So who are the candidates in the making. What would the betting board look like?  We have had a lay person at the helm.  Would there be a tendency to move towards an ordained person?  We have had a woman, should there now be a man?  We have not had a person of color for some years, is now the time?

Should we scrap all the outside markers and accent the interests and commitment?  For example, if we are contemplating major restructure and re-envisioning ought that direct our gaze (and bets) to particular possibilities?  If we are interested in a dispersed model of authority and program action, should we look for someone who has experience in moving from hierarchical to broadly networked sorts of organizations?  If we are interested in affirming the centrality of Episcopal spiritual and worship grounding, do we look for a spiritual director with organizational skills?  What? What do we look for?

And having elected a President what to we look for in a Vice President? And is there any use for that office between conventions? (If not could we leave the election, if necessary because of the death or incapacity of the President, to the Executive Council, to serve until the next General Convention.)

There it is: an open election, with no clear front runners in place.