Convention is underway even though the first legislative session is on July 5th. The Blue Book which contains the reports of all the Committees, Commissions, Boards and Agencies that have been at work over the past three years, says that General Convention is from July 5 to July 12.  Those are the legislative days. But the convention itself forms up today and tomorrow. Today registration begins and there are meetings of legislative committee chairs. Tomorrow the Presiding Officers will speak to us and we will begin organizing the legislative committees and their work.

The trickle of people who came in yesterday will become a flood today.

The other big election is for the Trustees of the Church Pension Fund.  There is a bit of talk about how strongly the Church Pension Group and the existing trustees push for re-election of members who have already been serving. The Trustees is sometimes understood as a bit of a closed club and that is resented.  How that effects electability is hard to say.

The election of a President and Vice President of the House of Deputies is a bit of a strange contest at this time.  Only two people have come forward to stand for president - The Rev. Gay Jennings and Ms. Martha Alexander.  One is clergy, the other lay. If a clergy person wins the election for President, Sally Johnson and Pauline H.G. Getz will be  candidates for vice president. (The president and vice president must be of different "orders" - lay or ordained). At the moment there are no other names before us.  No doubt there will be nominations from the floor, particularly for the VP slot, given that we won't know until after the election of the president whether the VP will be lay or ordained. But still, here we are about a week away from the elections and only four people have come forward. 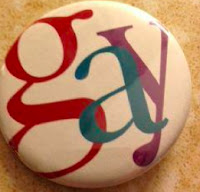 Gay Jennings has produced the first button for this General Convention, a campaign button that simply says, "GAY".  Its nicely done as a graphic.

The Exhibit Hall opens today and I will be exploring this afternoon. It will probably be the only time during Convention that I will have for schmoozing with folk there. So expect some more photos of that tribal fest.

Around the table yesterday at dinner there was some conversation about the news that several bishops have been notified that charges have been filed against them by persons whose names have been withheld (appropriately) and that the intake officer (in this case Bishop Clay Matthews) is examining the matter. The blog world is in a bit of feeding frenzy looking for conspiracy, mendacity, and other nasty possibilities of manipulation. I don't there is any.  As to why it has come up right before convention, in spite of the theory that this is to distract us from worthy work, etc, my sense is that it came up because the intake officer is obliged to inform the accused promptly.  The real question is why did the person making the charge do so at this moment.