Imaging the Bundling of Resentments


Printing and printmaking have always been a source of political and social commentary. The printing of texts (type setting) was from the beginning accompanied by the printing of images (wood blocks, etchings, engravings) and those parings made both the written text and the image take on more nuanced meanings.


The notion that images themselves, accompanied sometimes by text, and charged with socially relevant content could be mass produced and widely distributed has been a major part of the attraction of printmaking as an art form. Posters, broadsides, leaflets, banners, and even limited edition works of fine art printing later reproduced in larger quantities, all contributed to the ongoing tradition of multi-copy politically charged art images. Cartoons, editorial and otherwise, play a particular role in the printing arts because of their entertainment value, a perfect cover for political commentary.
In these rather odd political times, and in my own creation of block prints, I have found occasion to contribute to this tradition of image making.
For many years I have been interested in the political life of Haiti. Several of my works have been images related to political and social concerns in Haiti.
Francois Duvalier continues to be present, long after his death, in the complex political life of Haiti. This image, as a stand alone, and as part of a larger monoprint, is of Duvalier, President for Life and dictator. It is a reminder that the enduring presence of the dictator is a fact of Haitian political life. Until a way is found to truly bury the Dictator it will be difficult to move on.

Here, Duvalier is imprinted on a back drop of red, white and black, the red and black the colors of the Haitian flag under Duvalier, the white the continuing presence of colonial and white agendas regarding Haiti. The receding moon signals the long night of oppression.

And, as signaled by this small linocut, there was (and is) the sense that the omnipresent Dictator sees everything and that no wrong to either him or to the state that he alone represents goes unnoticed.


The dictatorship spawned the Tonton Macoute which concerned itself with state security, which is to say, the security of the leader of the State, namely the dictator himself. In the police state the policeman, the executioner and the President were one and the same. Thus the poster, "bouro pa zanmi nou." The dictator is not our friend.

In the last year and a half I have printed a number of political themed linocuts and etchings. They each concern some aspect of the rise of a peculiar form of populism which builds on the desires of those who feel left behind or put down by the elites of our social structures. It is not so much a movement as it is a rumbling devoid of concern for anything but acquisitions and self-promotion with little or no regard for the civil or social constructs that help us maintain some institutional life as a nation. This rumbling has led to a bundling of resentments that together mimic the gathering of syndicates or guilds into a united bond, in other words a fascism. It is, of course, a mimic only. The bundling here is more raw, more sensual, more terrifying for its lack of any coherence. This bundling is a gathering of resentments, and the unity is one that is at its core a gathering of anger.

I have been working to express some aspects of my perception of this rumbling in the hopes to illustrate some of the angers that give rise to and arise out of these political expressions and to name the demons that reside in those angers. 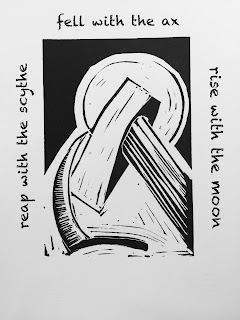 This bookplate, a combination of type and linocut, is its own call to arms: the scythe to cut away the weeds, the ax to cut down the dead wood, the moon to accompany with its light the rising of the people. The tools are those of those who reap and fell. It is of course a parallel to the hammer and sickle, the union of workers and farmers. It is the antithesis of the coalition of capitalists and owners who are the core of the move to the right. It represents a call to action which I believe is necessary in these times.


In November 2015 there was an attach in Paris France. 130 people were killed. I carved this woodblock to remember. It is of Marianne, the image of France, looking wrecked. She is wearing the liberty cap, but she is not at all victorious. Rather she is determined.


In so much that has transpired in the past several years "grasping" has been a major motivator. The political processes that would involve compromise, cooperation or even civil discourse, have been replaced by "me and mine."  So the linocut on the left, in which hands of monsters reach out to grasp whatever can be grasped.

In mid 2016 I went to Austria. At the time the election cycle was underway in both Austria and the US. The worry in both countries was about the rise of right wing violence, carried out under the flag of national sovereignty and security. From that a number of images have come: 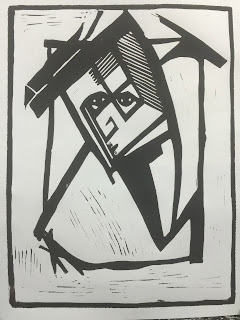 The first of these was this: " The unwelcome visitor," based on a painting I did while in Austria, in which the swastika is superimposed on a face, and elements of a swastika can be found in the body as well. The face reflects something of candidates from the right in both countries. 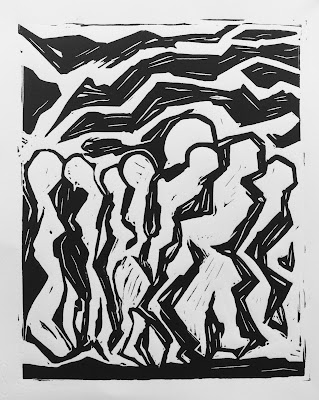 In the late summer of 2016 my sense of despair increased by personal information that I was dealing with cancer and the emerging reality that we were, in the US, likely to elect someone who played on our fears but who otherwise had little or no abilities to deal with the problems of the US in constructive ways. Here was my estimation of that despair. 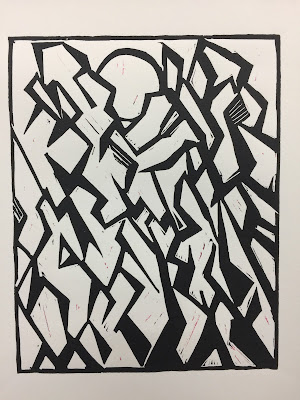 The Charlottesville rally of nationalists and supremacists in August 2017 introduced the frightening reality of an anger that bundled fears and resentments into a political force for a new fascism. The march by torchlight mimicked both rallies Nazi Germany and lynch mobs. The surface order of the marchers belied the chaos just beneath the surface. 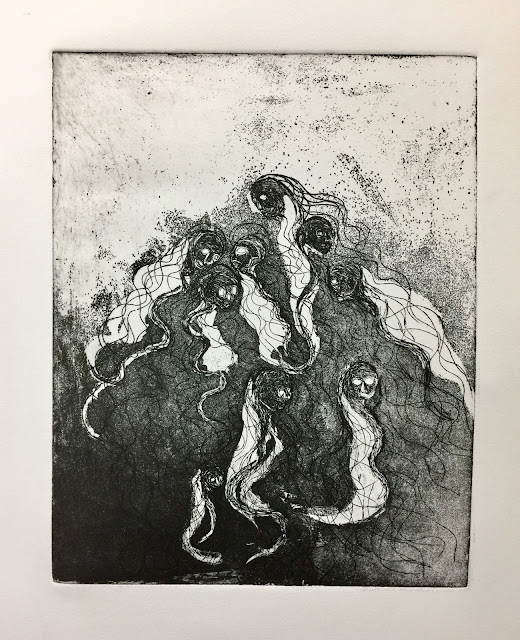 The October 2017 shooting in Las Vegas that left 58 killed was violence without apparent political motive, the work of a single gunman. It was however a major event in the unfolding reality of the dangers of automatic weapons in the hands of the deranged, and the seeming inability of this country to deal with the glut of arms and the matter of gun ownership. Here the souls of the dead in Las Vegas rise from the madness, but the madness is still there. 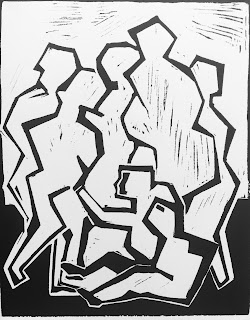 The politics that draws on people's fears has led more and more to a kind of selfishness that overwhelms any need to care for one another. The political right avoids the poor or the incapacitated, suggesting that their plight is somehow caused by themselves. And, as has happened again after the killings in Parkland Florida, the victims are blamed for either not being careful enough or armed themselves, or worse the source of the problem. Here the two on the ground, somehow incapacitated, are unnoticed by those who pass by. 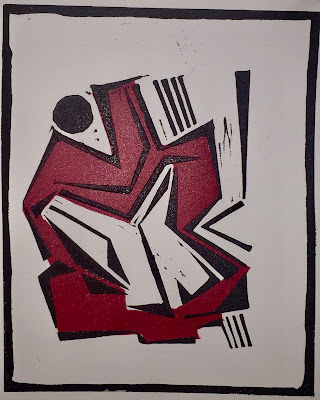 And yet, I saw in Florida, following the shooting, some sense that from the ashes of the violence arises new life and possibilities.  I made this block on Ash Wednesday not knowing that by the end of the day it would be, for me, a sign related to both the shooting and the hope, held very tentatively, for some way forward.

Not until later did the students and their protest and anguish come, and with it some hope that a new movement to end the carnage might be raised.

In the mean time I made this monoprint / linocut of what the chalk outlines of 17 students and teachers might look like, all together with the shadow outlines of the dead from past killings.  This was completed on Sunday, February 18th. 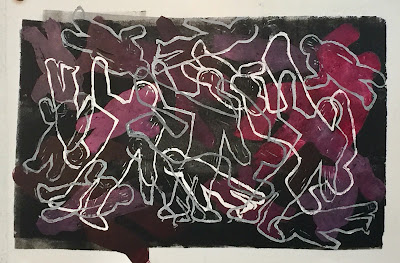 We live in a time where there is a huge range of responses to the political situation in which we in the US find ourselves, words on top of words.
What I am attempting to do is present at least some commentary that is nearly word free. These images, I hope, are evocative of some of the more primary elements in the fascist populism that has sprung up in America. And I hope too the images also are reminders of the horrors that are there as well.
Posted by Mark Harris at 2/19/2018 02:03:00 PM