The Limits of Provisionality

(editorial note: I wrote the following in a wilderness moment, and then as a gift this Saturday morning got a message on the House of Bishops/ House of Deputies list sent by Louie Crew to the list. It was a gracious and wonderful reminder that the gathering is still on and the hopes are still that that we will not only meet in the great getting up morning but perhaps even in 2009. I quote from it with his permission.

"I recommend dropping in on the Fort Worth diocesan convention today. ...The live webcast is available at http://www.standfirminfaith.com/ and is expected to start at 8am CST and go till 6pm CST.

It's too easy to mythologize and demonize those with whom I radically disagree. That's less possible when I watch them go about the same tasks we go about in my diocese, trying to respond to the needs of those around us as faithfully as we can...

I hope that I am reelected at our convention late in January so that I can serve with them. I hope they'll choose today still to be there in

Now to my essay, "The Limits of Provisionality," tempered by Louie's gracious hope.)

One of the marks of Anglicanism is the sense that we Anglicans hold those behaviors, actions, ceremonials, theologies, statements, etc, that are peculiarly Anglican as provisional against the day when God will inform us in deeper ways through Scripture, Reason and Tradition of the Truth in Jesus Christ. That is, we do not assume that we Anglicans are in any final way right. We do not claim to be the true church, but rather an expression of the true church.

One way to think of ourselves is to suppose we are in a large room, crowded with Anglicans with various recent experiences, and at the same time some sense of family. We find ourselves grounded in different perspectives on theology, used to different ceremonial, have differing sensibilities about social and moral concerns. Everyone at this gathering talks of what they know of the presence of the Lord in their lives, the missionary sense that they derive from such presence, and the lives they lead in the light of Christ. They eat and drink together a lot. Some will accuse us of being a party in progress.

It might not be very clear from observing this group that they are going anywhere together, or that they have any sort of organization that makes sense, but perhaps the astute observer would note that some in the room pay serious attention to things that particularly interested them and that others are moved to emotional response by what they hear from others. The keen observer might come to think that there was work being done in this room, chaotic as it seemed.

The primary sense of the crowd would be that it was a group of persons kindly affectioned to one another and glad to be together. It might be called a community of loving kindness. And it would be a provisional community – who knew when the crowd might get larger, smaller, be strongly affected by new information, new people, new ideas, new expressions of the faith? But the crowd would be seen to be able to manage quite well with that provisionality.

How long does that provisionality hold? How long can the crowd maintain its current numbers or form? No one knows. Should those who live provisionally in this community be overly concerned if people leave the group and go elsewhere, or come into the group with new ideas and thoughts for the provisional mix? It's hard to say.

We might expect that when some in the crowd become more and more uncomfortable with being provisional and begin to assert that their understandings are of the catholic faith and those of others in the crowd were not, the limits of provisionality would get tested. The more the push for a particular position as that of the "faith once delivered of the Saints," the more the community would begin to be nervous about their own provisionality. What had seemed a gracious effort to be a community of mutuality and loving kindness now would look like a lack of faith. Others than might begin to be more stringent as well, calling for obedience to the call that they had experienced and with which they were engaged.

Of course when that happens, things don't work out so well. We might expect that the crowd would become increasingly agitated and restless. People who before wondered in an out of one another's circles would now be hunkered down and talking to their own. There would be considerable averting of eyes and wagging of tongues. There would be increasing talk of splitting the crowd so that people could be more comfortable with others who shared their understandings of the Truth.

This of course is a rather limited overview of the pattern that has confronted Anglicanism again and again. Still it perhaps has some merit.

What seems to be a unique collapse of unity within Anglicanism in the present moment is unfortunately not all that unique. We have been this way before. Sometimes dissenters have felt pushed out and moved on to gather elsewhere (the Methodists – we lost everything but the music on that one), sometimes they have attempted to move the provisionality crowd out of the meeting room (the Commonwealth Presbyterianism in England – they lost, for the party became insufferable.) Sometimes they have been hounded by the seemingly provisional crowd from the larger gathering (The Society of Friends – who took holy silence with them and we need it badly). In each case the struggles have bent the various groups into parties, with party loyalties, and such loyalties have poisoned the provisional sensibility of the Anglican gathering.

And yet in every period the crowd who held to provisionality and a community of mutuality has kept on gathering and eventually returned to this notion that we ought to be gathering of people who would share faith – living into the truth of scripture, expressing faith in terms of experiential reasonableness, and sharing the witness of the church throughout its own life and history, and do so without the arrogance of proclaiming ourselves the sole or even the complete expression of the Christian faith and church.

Provisionality is sometimes uncomfortable and avoidance is a temptation. But we must understand that provisionality is not an option, it is the direct consequence of our efforts to live as a people of the resurrection. The life we lead as people who have died with the Lord so that we are also raised up with him is uncharted territory, except for the promise that the Lord made that he has gone before us and that we are not alone. What we actually do is the best we can do given that we are a new people and we have walked through the door into a new way of being. If we are unwilling to be a provisional people we are in some way denying the power of the Holy Spirit, for God's working in us will always bring to light things that we could not have dreamed of.

At our best Anglicans live in the tension of relating to others whose experiences of faithful living bother us, and yet we live there knowing that that tension is a reminder to each of us that we dare not be arrogant in claiming our own path to be the true one, and all others false.

At our worse we do claim a particular path to be the true one. This claiming takes many forms, and we see them in the current conflicts we face. We are none of us free from the sin of arrogance.

But of course, such sin is part of our condition, and certainly part of Anglican identity. Party conflict is a natural for us. I believe God will forgive our arrogance, but not our nailing down the Truth. If we harden our hearts and become rigidly certain that we possess the Truth, we will certainly sin against the Holy Spirit.

I have been thinking about the limits of provisionality in these last few days. Various challenges to provisional living are present: There are the lawsuits in Florida, Colorado, and most notably this week in Virginia; there is the possibility of several diocesan bishops and large portions of their communities leaving the Episcopal Church for other climes; there are ordinations of bishops part of other Provinces in the Anglican Communion whose mission will be in the US; there are charges of harsh response from the Episcopal Church.

What are the limits to provisionality? Well, after all the conversation in the big room, with all the Anglicans from around the world and in our own back yards talking and learning from one another, when those who clamor for the definitive community that is the True Church wreck the provisional life, there is only this to do:

Turn off the lights and take out the trash. 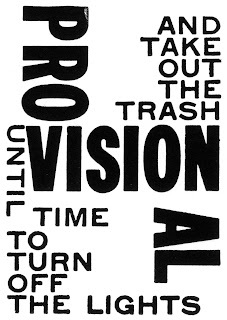 Provisionality does not include being held hostage to some covenanted code, or someone's sense that they are the true protectors of the faith once delivered, or some high toned loyalty oath to the unvarnished scriptures. When the conversation is dominated by those who rant and who are no longer interested in gathering in a room big enough for common action among truly diverse peoples, it may be time to say, "The party's over. Come back tomorrow."

I think the party is over: Time to turn off the lights and take out the trash.

When we gather again as a community only those who can live into the open future that the resurrection demands will come, and for a while again we will be a provisional people, representing the best of Anglicanism, and perhaps the hope for an real spiritual fellowship of churches. I have no idea if we will be called Anglicans or not. I hope the good things of Anglicanism are not thrown out along with the trash, but you never know.

I strongly believe that the Anglican Communion, as a fellowship of churches committed to being an expression of the Church, but not The Church, provisional and diverse in its understandings and experience of the faith and willing to work together as churches, will continue. I believe the Episcopal Church will be a part of that fellowship.

I also believe that when this community gathers, perhaps at Lambeth, but surely in a wide variety of gatherings great and small in which bread is broken and stories told, God's will for us all will be advanced and we will be made new for new days.

Others will go and make their own way.

But for this to happen it is time to declare that this party is over. This party has become spiritually disabling.

The only way to believe in the resurrection is to practice resurrection. (Wendell Berry says this, Laurence Ferlinghetti says this, the Rector of all Lewes says this, even I say this.) When this gathering is over there is another ready to begin.

The Anglican sense of provisionality will find new form.

The Episcopal Church will live into that provisionality.

The gathering will gather again.