After all the fuss, things are quiet, very quiet. Is it rest, or calm before the storm, or morbidity? 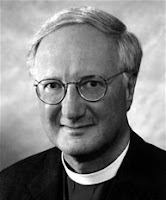 Well, he is in a stuck place, having fought for his rights as bishop and for his name and honor. So far things are not going well. He has been found guilty of conduct unbecoming a clergyperson and the recommendation is that he be deposed. The problem is that now there appear to be letters that would show that he was kept in the dark about the full nature of the affair his brother, a priest under his charge, had with a 14 year old.

According to George Conger, in a recent article in the Church of England Newspaper, "The victim swore under oath that she wanted Charles Bennison to break up the relationship, but the new evidence, his lawyers claimed, shows the victim had sought to hide the affair from Charles Bennison. The victim’s motive was not outrage for having been abused, but revenged for having been abandoned by John Bennison for another woman." The letters that would supposedly prove this are not being released by order of the ecclesiastical court supposedly because their release would cause harm to the victim.

Three odd things about this:

(i) Bishop Bennison, whatever the situation, appears to have had knowledge of the affair, having testified to that effect in the trial. ENS reported,

"On the fourth and final day of the trial earlier this month, Bennison told the court that he would do nothing different than what he did when he learned that his younger brother seduced the 14-year-old girl in his parish. He testified that he was made aware of the situation shortly before John's ordination as priest. He said he confronted him but John denied repeatedly any improper conduct. The bishop said he ordered John to leave the church, but it was two more months before his brother departed, while continuing his abuse of the girl.

Bennison admitted under cross examination that he felt "a little bit" uncomfortable, but maintained that he knew of no impediment or criminal action to prevent John's ordination. As a result, he testified, he presented his brother for ordination by his father, Bishop Charles Bennison Sr., at a service in Kalamazoo, Michigan." The victim, the "girl" in question, was just that - a girl of 14. It is irrelevant if the letters show an effort to keep Bishop Bennison in the dark. He testified that he wasn't under oath. Dragging the letters out simply makes the victim look bad. Sounds like beat the victim to me. Bennison needs better lawyers.

(ii) It is always appropriate to defend ones honor and name. But the Church is an odd place where the customer may not be always right, but the good of the community comes before ones own rights or the rights finally of others. That is why clergy can't "take the fifth" in an ecclesiastical trial and that is why evidence that otherwise might mitigate the sentence doesn't always find its way to the surface.

(iii) No one seems to be much interested in all this. Left or right, people are simply waiting for Bishop Bennison to decide its is time to go. It will happen.

Another bit of Pennsylvania "troubles." The Rev. David Moyer, sometime rector of The Church of the Good Shepherd, Rosemont, PA, was a travelin' man: first he was in Pennsylvania, was deposed, then by magic he first bounced to Africa and then to the Diocese of Pittsburgh, taken under the wing of the sometime bishop of Pittsburgh. Then he got ordained a bishop in the Anglican Church in America where he is now the Suffragan Bishop for the Armed Forces for the ACA, while also Assistant Bishop in the Diocese of the Murray in the Anglican Church of Australia.

The thing is, matters are coming to a head. Again from George Conger: "THE DIOCESE of Pennsylvania has filed suit against the flagship parish of the Forward in Faith movement in the US, the Church of the Good Shepherd in Rosemont, seeking control of the property." The "flagship parish in the Forward in Faith movement," means I suppose that this church, along with its bishop, might well be the core of the Forward in Faith "Diocese" reported in the list of participating dioceses and proto-dioceses in the upcoming synod of the Anglican Church in North America. (see list HERE.) I've heard nothing about Moyer being part of ACNA. the Traditional Anglican Communion "local" branch is, I believe the Anglican Church in America. They didn't come on board with ACNA, but maybe this is a way for David Moyer to slide on in.

Good thing, since it may well be that he will have to slide on out from Good Sheperd.

But again there is little on him, or this particular legal struggle. Moyer made too many jumps on the chess board and now no one knows just what or where he is. My guess his jumping about has pleased very few, even the Anglo-Catholics in the ursurpers world of ACNA.

He is not likely to get the required consents and thus his election will be of no effect, except to act as an impediment to a whole new class of people most likely to present manner-of -life problems. The way in which Forrester was drawn and quartered by the media and by layered digging is a blot on all of us, and is yet another reason to do in the idea that we should only ordain those persons as bishops whose manner of life is unassailable out there in the cruel world of idiocy passing as orthodoxy.

Here's the skinny on this one: The last round of questioning of Forrester was perfectly reasonable. He thinks, writes, acts, and does worship in ways that do not appear to conform to the "normal" language, logic and liturgical practice of this Church. Good for him. So asking him what he is up to is alright, in fact required. But that line of questioning did not stand on its own: it was preceded by two major waves of criticism: that he was going to be a "Buddhist Bishop," whatever that means, and that his election was a setup job. So by the time questioners go there he was already fully suspect by all those who on other occasions have taken to the streets with torches, claiming to be light bringers while actually inciting the mob. The light that was brought to the matter was already the light of suspicion.

So, he will in all likelihood not make it. But no one much wants to talk about it, it appears. For the liberal and progressive crowd it is an embarrassment to see how many of voted being careful to show that they were indeed concerned to be orthodox. Very few at least admitted that occasionally they too might have voiced some questions about renouncing the devil as a personal being, or might have danced a bit around the absolute necessity of holding to the belief that the Atonement is the core of why Jesus died. No one was asked if they were without sin, and so throwing stones was OK. As for the gnawing dogs of pseudo-orthodoxy, the silence there concerns the media fire lit whereby the light turned out not to be the light of enquiry but the torches of the mob.

There is considerable quiet out there on the Forrester matter. For good reason. Shame on us all.

This is not about the votes taken. I believe Forrester is a challenge and that there are good reasons to proceed with caution. It is about the climate in which the votes were taken.

We need also to look back at the consents process with Bishop Lawrence, where the climate of suspicion made it hard to distinguish between him as part of the loyal opposition and his being ready at any moment to bolt the Episcopal Church. It was further complicated by the not too careful management of gathering consents. The same can be said for Fr. Forrester's consent process. So perhaps Fr. Forrester will be elected again and we can go back and do this right.

But meanwhile the real project proceeds apace. In mounting the call for orthodoxy and orthopraxy the rigorists in the crowd are working to replace the restrictions of B033 by mounting an alternate way of demanding so called "orthodox" behavior. The manner of life issue weeds out gay people, but it also weeds out free-thinkers (or what passes for that in Anglican circles), challenging theologians, Gospel witness that does not begin by talking about the sinnerly-ness of the poor, but about their poverty, etc. So the consents are going to be more tightly drawn around the consent givers showing their orthodox badge.

See, the consent givers will say, I have a badge. I'm really orthodox no matter what you think.
Forrester's nomination is not, on this level, about Forrester or Northern Michigan at all. It is about the orthodoxy of those being asked to give consent.

This does NOT suggest that good and progressive people could not have had good reasons to have voted no on consent. It means only that we must be careful that we do not play into the hands of those who want to control the church by fear. Fear is what lies behind wanting to make sure everyone knows just how pure and undefiled and orthodox we are. The fear merchants are out selling their wares, and watching to see how we vote, what we do or say, and our manner of life. But there won't be much talk about it all, for fear is even operative there.

These are quiet times, a calm before the storm I think. It seems a good time to "rest in Jesus," remembering that in a few short weeks many of us will be at General Convention and fear should not be part of our agenda. Oddly, many of those who would have us be fearful will not be there. They have already left the building.
Posted by Mark Harris at 6/09/2009 11:17:00 AM