I have been asked to assist in a plenary meeting of Churches Uniting In Christ (CUIC), the follow-up conversations by those churches that were involved in the Consultation on Church Union (COCU).  It has stirred in me once again the desire to both know more about other Christian communities and to work for visible union - not in a meta / mega / super church, but rather in visible action together. 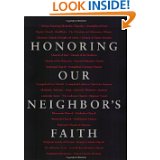 In terms of reading I was particularly delighted to find a clear and well written introduction to the faith of neighbors - HONORING OUR NEIGHBOR'S FAITH, published by Augsburg Fortress Press for the ELCA in 1999.  Of course I was interested about what it said about The Episcopal Church. Here are some snippets from that description:
"It is sometimes hard for non-Episcopalians to figure out just what the Episcopal Church is all about....why all the variations?" "The Episcopal Church looks the way it does - and believes what it believes, for that matter - because of its history." "Given its background, it is no wonder that the Episcopal Church cannot be described by any one particular theological label. These variations of interpretation have come to be considered as quite normal. But its theology is not much different from that of other Christian bodies."  All true.
I got the book because "on the ground" here in Lewes, the little city on the bay where it meets the big water, St. Peter's  Episcopal Church is two blocks away from an African Methodist Episcopal Church, St. George's. The one mostly white, the other mostly African American.
I have been to St George's Church on several occasions, when the Rector of all Lewes has cut me free of late Sunday morning duties, and I know a good bit about the history of the AME Church and am involved through CUIC with denominational leaders of the AME Church. But the book helped me place the specifics of AME Church history in relation to other African American Methodist churches.
Every year the African American community in the Lewes area hold a Martin Luther King, Jr Day parade, a banquet and a prayer service. St. Peter's has been the host church for the reception following the parade. This year, however, we at St. Peter's felt it would be helpful for us if we revisited Dr. King's speeches with greater care, so for four Monday nights we are gathering to hear his speeches and his writings: so far we have heard a reading of the Letter from a Birmingham Jail, and the Speech at the 1963 March on Washington for Jobs and Freedom (the "I have a Dream" speech.)  Next week we will hear his speech on the War in Viet Nam and finally we will hear Dr. King's "I have been to the Mountain" speech the night before he was killed.
The pastor of the AME Church has joined us in this effort and some members of St George's have been part of the listening and discussion and we are beginning to look beyond the boundaries of history to some new ways of being together as Christians in this little city.  Little by little we can learn to hear each other's story and share a bit more in a common story.
All of this has to do, of course, with moving on beyond being Episcopalian only, or AME only, or any other denomination ONLY.
From an entirely different "on the ground" experience another book as come to my attention.
As readers may know I am on Executive Council of The Episcopal Church. My six year term is up in 2012 and I must say that while I am honored to serve I will be glad when it is over. Part of my joy in leaving is due to my growing feeling that the current way of organizing the Church on a national level has about run its course.  The National Council, now Executive Council, was formed in 1919 and gave The Episcopal Church a corporate identity and management style as well as a centralized sense of how structure and program were to be conducted. In the past 90 years TEC has learned a great deal about the value of central structure and program and a good bit about its pitfalls.
I was muttering to a colleague, Del Glover, that maybe it was time for the corporation and its regulatory functions to be minimized and for other ways of working to bloom.  He sent me an essay and told me to read it - "A More True "Domestic and Foreign Missionary Society": Toward a missional Polity for the Episcopal Church," by Dwight Zscheile.  It is in a book, "The Missional Church and Denominations," edited by Craig Van Gelder.

The essay by Dwight Zscheile is quite extraordinary. On the one hand it clearly spells out the history of just how the Episcopal Church became The Episcopal Church, an organization build using a corporate model derived from the business world. That model served us well for a considerable time, but the costs were high, among them being the loss of some of the sense of "missionary" in the Domestic and Foreign Missionary Society.
On the other hand it recognizes that "missionary" is hardly the word to describe the work of the missio Dei, God's mission, in the world. The accent in missio Dei thinking from the one being sent - the missionary - to the one sending with mission in mind and heart, i.e. the sort of God we find as we unwind the meaning of the Trinity.  The focus then needs to be on the Church as missional, not missionary - on mission as it relates to the creative and sustaining work of the Trinity, rather than the agenda of the missionary.
Zscheile believes that just as corporations were said to have a mission, and mission statements, and goals and so forth, so TEC came to have the same and mission became the vision of the Church to this or that end. While that might have been fairly crisp and manageable, the end results are limited and lacking in what we might call Pentecostal zeal.
The turn to a missional polity for TEC would mean continuing the corporate structure for legal purposes, but consigning that effort to a minimalist mode, and turning our efforts to more limber and agile models of work in which attention is paid to discerning what it is that God might, in creative mode, be up to in the world, and finding ways to incarnate the spirit of that mission - God's mission - in the world.
Dwight Zscheile believes that such a change in focus does not spell the end of our Episcopal polity, but rather molds it to new ends. There will continue to be parishes, dioceses, the union of dioceses in a General Convention, etc, but that we can come to describe the relations between the various components in more, shall we say, pentecostal ways - in ways open to the Spirit.
I find Zscheile's essay very helpful. At a time of some despair over the state of things in the corporate world of TEC it is wonderful to have some future direction spelled out.
Of course, if some folk in the Anglican Communion are put off by TEC's actions now, this will scare the pants off them. The idea of people gathered around such unpredictable possibilities as may arise from attempting to discern God's will for us can only lead to trouble. Good trouble, perhaps.
For years now I have  had conversation with now Bishop Ian Douglas concerning the idea of "missio Dei." The phrase gets bandied about as if we had any idea of what God's mission was about. Of course we have the notion that God is about restoration to unity, etc, and that that is reflected in the unity that is seen and observed among the three persons of the Trinity, and so forth.
But friends, deep down inside I know that we are a small people, whose God turns out to more or less want what we think would be really really nice - for us.  I get a bit antsy, for example, when we pray at the end of Rite II, Prayer B, "put all things in subjection under your Christ."  Is the unity we seek like that?  Perhaps the unity to which we are to be restored, in God's mission, is not the unity the Church seeks, but rather an open ended conversation / action dance among the urge to create, the urge to sustain and the urge to empower, (or something like that.)  The problem with the notion of "God's mission" is that our arrogance will end up making God's mission look a lot like what we want.
And honoring our neighbor's faith (to go back to the first book mentioned) may mean finally living into the rough and tumble world where inclusiveness will require that we not be too lock stepped about this unity business.
When the lion and the lamb lie down together it may look like unity, but we perhaps better allow for the occasional anxious moment when it is not at all clear that unity is a good thing.
Back in 2007 I wrote this poem:
When the lion lies down with the lamb I will believe in transformationon one part or the other, or both.Until then I believe in transfiguration,where everything is filled with wonder,and maybe sweet compromise:Where the lion says,"I'll pretend you taste goodwhen all I get is a nuzzle,"

and the lamb pretends the lion said,"I won't eat you,"but still sweats.
I stand by that.