Returning to the Fray

"Returning to the fray," evokes the notion that there is a struggle going on and that while one might step back for a moment, it is time to step back into "the fray." Apparently, "fray" has its origins in an archaic Middle English word, "fray" which means "quarrel."
Preludium was started in response to a "fray", a quarrel by various groups of Episcopalians and Anglicans from elsewhere about the leadership and direction (sometimes called the trajectory)  of the Episcopal Church.
The quarrelers first maintained that the leadership of The Episcopal Church had by false guidance and manipulation produced a majority progressive voice at General Convention and a liberal agenda for the offices of the Episcopal Church Center that departed from the faith and, while they indeed had legislative majorities and entrenched leadership of national church offices, they did not really represent the majority of Episcopalians. The quarrel was that t TEC was captive to a minority left leaning, anti-Christian, anti-Biblical and anti-Anglican voice.
The quarrelers began to work on many fronts (i) to denounce TEC's leadership, (ii) dismantle what they saw as theologically and ecclesiologically misguided changes in prayer book practice, ordination qualifications and an emerging doctrine of inclusion, and (iii) barring return of TEC leadership to more moderate positions, the replacement of TEC with a Church renewed in its commitment to a biblically based Anglicanism with leadership drawn from clergy they considered 'orthodox.'
The idea was to turn the tide against progressive action or barring that, to gather the people and leave, taking with them the silver, goods, name and place at the Anglican table.
Preludium, along with some other blogs, began to respond to all this, believing that the progressive work was important and needed to continue, and that there was no reason to simply give away goods, name and place to the small minority that was set on a different path.
Here on Preludium I set out first to support General Convention and the national church leadership as legitimate agents of the people called into the union of General Convention as TEC.  It was the contention here that TEC's leadership was legitimately representative of the majority of Episcopalians, that what we held was legitimately Anglican in theological and ecclesial terms, and that on the whole the decisions made to change the Prayer Book, ordain women, and work for greater inclusion were and are legitimate decisions to be made by a Christian community.
The quarrelers worked hard at the denunciation game, in every battle making the claim that The Episcopal Church had finally gone too far, that TEC had left the Anglican Communion and walked apart, that TEC had denied the Biblical basis for its faith, and so on.  The quarrelers seem to have been able to convince some 3-5% of Episcopalians that they are right and TEC is wrong.
The quarrelers claimed the high road - that they were the real Anglicans and TEC not, that they were orthodox and TEC not, that the innovations of TEC were unBiblical and unChristian and that they represented a better way for Anglicans in North America.  They have trumpeted the claimed that a majority of the world's Anglicans agree with them and not with TEC.  However, their effort to have TEC removed from the various Anglican Communion bodies has not happened except in a few instances, so they are now quarreling with the leadership of the Anglican Communion claiming that that leadership too is caught up in anti-Anglican, unorthodox, anti-biblical activities.
Again, not having been able to exercise majority rule in the existing bodies of governance, they have determined to ignore these bodies and distance themselves from any fellowship with churches and bishop leaders they find wanting.
Preludium has argued again and again that TEC is Anglican, Christian and biblically sound, and that the Anglican Communion as a fellowship of national and regional churches is a legitimate expression of koinonia, of church gathered as fellowship. We want the Anglican Communion to be precisely a fellowship of national and regional churches. We want this free association to succeed in a world of increasingly dogmatic enterprises.


To be honest, the effort to look at and respond to the bits and pieces of this quarrel through the past few years has been both demanding and exhausting.
This is the 1702nd post on Preludium in five and a half years. That makes about 300 entries per year. For a guy who can't spell, tends to write in long paragraphs and labors more than necessary on some and not nearly enough on other essays, this is a lot. So occasional down time seems in order.
I have been thinking - All the quarreling seems to have led to this:
Those who can't stand what TEC is doing, or has become, have shaken out about 3-5% of  TEC's membership, they could not take control of TEC or convince TEC to turn from its perceived "evil ways", and has fed and fed on discontents expressed elsewhere among Anglican churches and has found fellowship with those churches and people. They have left.

TEC of course continues to have good relations with many regional Anglican Churches (Provinces) and is not by any means alone and cut off from the fellowship of other Anglicans.
So now that the Anglican wind has come up and the quarrel has led to this - the disaffection of some Episcopalians from TEC and the possible multiplication of international Anglican communities of churches - what is there to say? 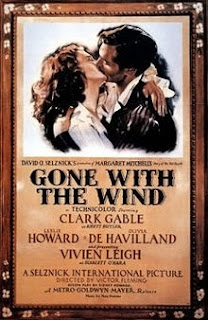 In my short respite from the fray these past two weeks, and reflecting on the first rumblings of the work up to the next big Anglican thing - the meeting of the Primates next month - over and over again I found myself thinking with Rhett Butler, "frankly, my dear, I don't give a damn."
You remember that scene?
Scarlett says, "Where shall I go? What shall I do?"
Rhett replies, "Frankly, my dear, I don't give a damn."
That's the last exchange between Scarlett and Rhett.
It seems to me it has come to that in the not so famous and quite extended theatrical production, "Gone with the Anglican Wind."
I am tired of the "Where shall I go? What shall I do?" histrionics of the quarrelers who continually claim that TEC (and me as part of it) have walked away from the Anglican Communion. That is garbage.
We in TEC have a lot of problems, some of which will require that we look again at the way we do our work as a Christian body. There are genuine leadership problems and plenty of critical work to be done, and it will be done by people who work hard and do not whine.  But we have not walked away from the Anglican Communion.

We have done new work that we have not always done well - we have worked at inclusion in ways that will serve the whole of the Communion well. And, in an increasingly secular society we have worked well at proclaiming the Good News of God in Christ. Although we may stumble a lot,  we are about God's mission.
The problem with the "I don't give a damn" temptation is, of course, that I do give a damn. Getting away from the fray gave me space to mutter about not caring, but I do. So return I must, bad spelling, long sentences, and all.
Still, this time around I am no longer very interested in dealing with the dramatic hand to the head and heart and the words, "What shall I do? Where shall I go?"  Those folk who have had it with The Episcopal Church, go. Don't take the silver or keep the keys and later claim to want to negotiate.
Those churches in the Communion who must distance themselves from us for reasons of matters concerning their own locations or their understanding of biblically based faith, do so. If you want to come and open missions in the United States who can stop you? But take some care in pronouncing TEC to be an abomination, anathema, or un-Christian. Such judgments have a tendency to be turned by the Spirit back again to the judges.
About such matters I hope Preludium will have less to say.
My sense is now to turn to what I do give a damn about: About The Episcopal Church living into its witness as a church ordered by mission and not alone by corporate need, about TEC becoming a pruned, lean, clear, engaged mission society.
So it is time to return to the fray: The quarrel is not with those who have left. They will have their reward. The quarrel is with ourselves, with TEC falling short of the faith and vision it has expressed in the Prayer Book we have, in the work of all the people of the fellowship of this church, (the koinonia) and in the amazing possibility of including all in ways that call all to purification and preparation for the effort to cast a mighty and wide net, such that in Jesus Christ everyone is called to new life.
And, of course, there will be from time to time occasion to look at the news of Primates Meetings and other Anglican Communion doings, but against the backdrop of a future, not the backdrop of drooping heads and wringing hands.
It is time to look forward.