Buddhist meditation folk practice, so do piano students, so do printmakers, candlestick makers, and presidential debate participants. Practice, practice, practice. And the question is, is practice the preparation for something else, or a thing in itself?  Is the practice dance still a dance?

Well dear friends, here at Preludium we have learned: practice is all there is.  I never got good at dancing, still even this weekend at the primo wedding of the decade I danced - but it was still practice.

The practice of religion and spiritual practice is that sort of thing - the practice of doing is the doing, and the doing is always practice. What seems to be a matter of remembering your lines, body forms, breathing, prayers, whatever, becomes living those things. Practice becomes the practice of.

I suppose I take the "religion" part of the "practice of religion" pretty seriously, or at least I pay attention to it a great deal.  I do a good bit of theological work keeping my sense what is sound religious activity.

I sometimes spend less time on the matter of practice. This week, however, I have been very much aware of the word "practice" in the practice of religion.  If religion is a matter of ordered life of prayer, sacrament and action, the "practice" is the doing of these things again and again, not so much to get it right as to drill deeper into the religious life itself.

From the standpoint of the "practice of religion"


practice does not make perfect,
practice is perfect.

No doubt, gentle reader, you knew that.

Still, sometimes it comes home. It is all practice, the "it" being life.  The practice of religion is PRACTICE.  We just do it.

So, this week I am practicing. 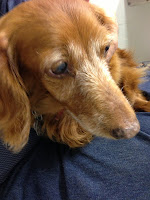 Our eldest dog Sarah is dying. She is old (15 now). She has congestive heart failure. She and I are practicing letting go. Shara is better at it than I am, still we are in it together. It reminds me of practice several months ago with my mother, Anne, who died in February.

Sarah was named after Anne's sister who had the same wonderful red hair. Anne too was ready to go and practice with her was practice with a master. She was good at it.

I'm also having to practice in other areas of the religious life:

I am practicing attention to my brother-in-law who had a heart attack last night. The practice of the heart's desire for the safe care of Allan and his family is a difficult practice. What to do, what to pray, how to love?   Practice, practice.

And I am engaging the practice of confidence in the leadership of our parish, which practice shows itself primarily in staying present and being part of the solution, which itself is more practice.

And  I am learning to practice honest distancing from hate. I "defriended" a friend on FaceBook whose postings were poison to whatever relationship we had. The practice of distance is a most peculiar form of practice, perhaps a negative way, although no necessarily the deep practice of the negative way. But the way is through the thicket of hate words and disrespect, and it is hard.

And I am learning from the kind priest at the wedding this weekend that presiding at a wedding is different from starring in a wedding. He was present, just enough for the sacrament of marriage to be truly present. He did not get in the way of the real work of the church in that place. This helped greatly as I was preparing to preside next week at a wedding.

And I am practicing just a bit of reconciliation by seeing reconciliation practiced by others and emulating them. They dance, I dance.  Maybe the break between The Episcopal Church and those who left is an opportunity for practice. Practice here requires patience with those how consider me a heretic or unbiblical.  It ain't easy. Practice, practice.

The practice of the religious life is not about being religious particularly. Religion will take care of itself. It is not about life, as if the practice had to be lively all the time, or even life giving. God gives life and liveliness. We just bring who we are.

The practice of the religious life is about practice.

And finally this Monday night I go now to practice putting it all down and taking it up in the morning. Perhaps I will dream of forests and a wide trail and walking through them with all those companions in practice, particularly Kathryn, now practicing in far Massachusetts.