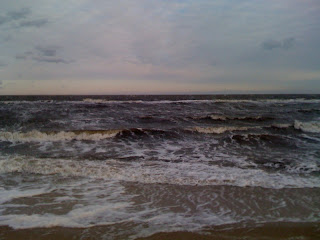 Readers of Preludium might imagine how depressing it is sometimes following the paths through the brambles of Anglican Land.  No longer is it a romp through the villages and green hills of England with its promise of one Church, one Nation, one King, which will always be.  Now setting out into Anglican Land involves great distances and often difficult promises in the midst of astounding pluralism. Now Anglicanism has to learn how to be one Church among many, part of a wide range of religions in a Country, and put up with heads of state that in no way pretend to be there by divine right. And, of course, the travels through Anglican Land reveal that the Church is just another contender in matters of power and principality. 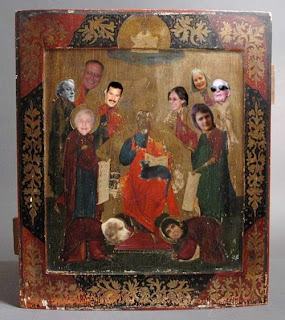 So it is with some real enjoyment that I find little moments of relief from the grey and angry seas, and find small hints that I am part of things that are more humorous, joyful and playful. Here are three of the more delightful of the past few days.
Over at Barkings of An Old Dog, Clumber has been working on icons of cyberspace folk. I made one of the icons, and feel duly honored, befuddled, etc. Here it is, on the left. The caption for this strange and wonderful work of art is, "Christ Followers, no matter what you may think!" For more of Clumber's work, go HERE.
And last night Pluralist Speaks put out an essay titled, "New Anglican Church" Always inventive, the Pluralist begins by saying,

"I've decided on a solution to my problem of being a square peg in a round hole. I'm going to start my own Anglican Church.

On 3rd December I shall announce that this Pluralist Anglican Church will begin, and in the place of cathedrals we shall convert a number of double and single garages attached to bishops' houses. You can generally get a few seats in and all the religious finery, so long as you leave the cars in the drive. The choir does have to assemble in the back garden. We've been to India and found someone related to some ancient line somewhere, with several glossy certificates that interact with an Anglican bishop in the seventeenth century, so off we go with lots of hands laying."

After muttering, as we all do, about the rival faction headed by the former, now deposed,  bishop of Pittsburgh, he gets down to the nittiy-gritty. " My bishops will use the ancient title Mar, as in Mar Garine, Mar Gate and Mar Kharris. Also I shall set up a theology seminar requiring one set of bullet points per Anglican non-residential ordinand, and thus, being six foot five, I shall henceforth be known as the Most Reverend Professor Mar Mite of the Pluralist Anglican Church."  The Mar Mite of the Pluralist Anglican Church made reference to someone bearing the resemblance to my name, "Mar Kharris."
I was of course flattered beyond all reason. But the Mar Mite didn't know, couldn't know, that my wife's name is Kathryn and sometimes signs off as Kharris. Since she is the on the ground shepherd around here, perhaps it is a reference to her. At any rate, coming as it did on our 42nd anniversary it was a nice touch. 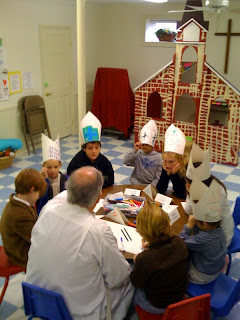 But the best is for last. As readers may remember it is only last week that Fort Worth met and many decided to go south to the Province of the Southern Cone, on the way to coming back into the Supposedly Anglican and improved GAFCON Province of North America (SAIGPNA).  Grey days indeed.

Fortunately the Rector of all Lewes and his loyal associate Jen, education maven, asked me to take the Sunday School (grades 2-6) through a romp into Anglican Land where I might try to get them to understand a bit about why we have bishops.  In the midst of dealing with bishops behaving badly, I got the change to spend an hour with the kids.
They had been talking the previous week about the disciples and so the take off point was to ask them first how did the disciples get to be that, and then what do suppose they did when they started getting arrested, or god old or died? So we talked about prayer and asking the Holy Spirit to fill new followers with the gifts to lead the Jesus people into life together.

That got us to bishops. So they all made miters and place cards. "Bishop Lizzie," "Bishop Josep," etc. We sat around the table and I called the meeting to order and we proceeded to talk about the following questions, and took votes.
The questions were:
Should Children receive Communion? 5 for 2 against. We then talked about what happens if you are in the minority. Answer, go to church, don't receive.
Should women be priests? 6 for 1 against. The person who voted against did so, it appears, just so there would some opposition.
If someone does someting really really really bad - like killing their whole family, the dog and a next door neighbor - should they be punished by killing them?  (by now two more children had joined us)
5 against 4 for.   Question: what do we do if it is close?  You could see the light go on in one kid's head: "I know, the majority rules."  We talked about that. In the end we said, this is what the church says, but if you disagree you are still part of the church.
Can a person who cannot read be a priest?  This really puzzled the kids, but one of the younger, who can't read very well yet, said that he thought yes. Somebody else could read, but the priest could still lead. 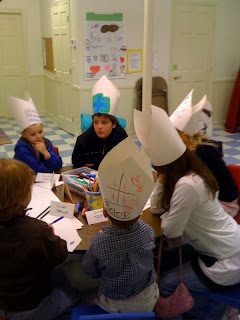 We were at it for 45 minutes, which for me was beyond success. Keeping a group of grade school kids engaged that long is pretty good.
But of course the real success (for me) was that these children go it: that people in the Church could debate and decide on issues and try to live with the results and continue to be together, and that they were as much part of it as the bishops were.  They loved the hats and unselfconsciously wore them around the rest of the morning.
So in the midst of stormy days there are new names, icons, and the wonder of children.
To quote a good friend:  That's my story and I'm sticking to it.
Let the people say AMEN.