On the Bizarre Edge of Anglican Land

Times are rough in Anglican Land and people are banging their heads against the wall because, as Warren Zevon said, “I’d rather feel pain than nothing at all.” Unfortunately the ringing in the ears that results leads to bizarre utterances and strange actions, to wit: 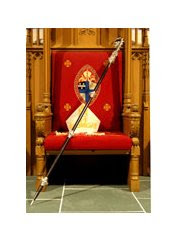 #1: It’s been several weeks since Moderator Duncan ceased to be a bishop in the Church, or had his license revoked, or whatever one’s theology of episcopacy requires in order to say that he is deposed. The seat for the Bishop of Pittsburgh is vacant. I notice that the Anglican Communion pages have not seen fit to remove Moderator Duncan's name as Bishop. One supposes this is an oversight. Its been a busy time for everyone.

The question is, what happened there?

Julia Duin of the Washington Times stated in her column concerning the formation of a new province,

If Julia Duin’s reporting is accurate, the ABC has intervened once again in the working of The Episcopal Church, suggesting that a deposed bishop of this church apply for admission of a new province in North America.

#2. Bishops Iker and Ackerman forgot that they used the notion that local parish churches are held in trust for the Episcopal Church in order to claim buildings that were being held by folks leaving the church when they were bishops in place.

William Fleener, Jr. has the scoop over on his blog. He writes,

“So it turns out that in the 1990’s a parish wanted to leave the Diocese of Fort Worth. They went to something called the Antiochean Orthodox Church so you can bet it was not because they thought Fort Worth was too conservative. Anyway, the diocese (wait for it) asserted the parish property was held in trust for the diocese and the national church. And there are even affidavits from William Wantland and Jack Iker.”


#3: William Wantland it appears wants to retain a place at the House of Bishops as a guest, even though he has departed the Episcopal Church for the Province of the Southern Cone. He is assisting Bishop Iker.

“Wantland, who now claims canonical residence in the Southern Cone rather than in The Episcopal Church, has written Presiding Bishop Katharine Jefferts Schori to ask that he be given honorary membership in the Episcopal Church’s House of Bishops.

Virtue offers this quotation from the letter:

‘I am not resigning my Orders, nor am I abandoning the communion of The Episcopal Church, being a member of a sister Province of the Anglican Communion, in compliance with the provisions of Canon IV.9. However, because I am no longer a member of The Episcopal Church, although residing within its jurisdiction in Oklahoma, I am no longer eligible to be a regular member of its House of Bishops. I therefore request that I be admitted as an honorary member of the (TEC) House of Bishops.’

How's that for logic?
Well that’s going to go over well, considering that (i) Wantland has indeed left TEC for a Province whose Primate has signed off on the Jerusalem Declaration that rejects churches and leadership that have strayed from the true path – that is TEC and the Anglican Church of Canada. He admits that he is no longer a member of TEC.

His reference to Canon IV.9 has to do with the abandonment of the communion of this Church and one might suppose that his exercising Episcopal ministry in the jurisdiction of the Diocese of Fort Worth beginning on the date of his superior’s exit from TEC and under his direction constitutes ministry without the express permission of the Episcopal authority in Fort Worth, which by the way is no longer Bishop Iker, since he left.

#4. The Archbishop of Canterbury worked hard to get the Anglican Covenant idea going. On the basis of the recommendation of the Windsor Report and the Primates he formed the Covenant Design Group that drafted first the Nassau Draft and now the St. Andrews Draft and commended them to the Provinces for consideration and review. Following Lambeth 2008 he again urged the work forward. Now it appears that the Church of England is not prepared to have any of its authority over its own life determined by any outside body. Thinking Anglicans gives the references to General Synod questions HERE.

In questions posed at General Synod, Mr. Justin Brett (Oxford) asked the Secretary General: “What research has been undertaken to establish the effect of the Church of England’s participation in an Anglican Communion Covenant upon the relationship between the Church of England and the Crown, given the Queen’s position as Supreme Governor of the Church of England, and the consequent tension between her prerogative and the potential demands of a disciplinary process within the proposed Covenant? Mr. William Fittall to reply as Secretary General: “The Church of England response of 19 December 2007 to the initial draft Covenant noted on page 13 that ‘it would be unlawful for the General Synod to delegate its decision making powers to the primates, and that this therefore means that it could not sign up to a Covenant which purported to give the primates of the Communion the ability to give ‘direction’ about the course of action that the Church of England should take.’ The same would be true in relation to delegation to any other body of the Anglican Communion. Since as a matter of law the Church of England could not submit itself to any such external power of direction, any separate possible difficulties in relation to the Royal Prerogative could not in practice arise.”

Well, OK. If the CofE can’t sign off on “such external power of direction” then the Covenant will either have to be the sort of thing many of us in TEC believe might be quite healthy, namely a document with some clarity about what it is we hold in common, or it will not be a document that the CofE or TEC or I suspect many other Provinces could sign off on.

What is bizarre about this is that most of the progressive press is not seeing this as good news. It does not mean the Covenant idea is dead, far from it. It means that the Covenant might in fact be a reasonable document that unites rather than coerces.

Then there are seemingly more ordinary happenings in the Episcopal Church and the Anglican Communion that might tip, if only slightly, into edgy sorts of places.

#5. The Episcopal Church, as a Province, is well into its third year of a new administration and there are always changes in the staff and configuration of ministries at the Church Center. Still the past several months have seen the departure of three staff officers in Communications and Overseas Partnerships. These positions were all of considerable importance. In a time of some difficult in the Church at large these departures, even if for the best of reasons, are unsettling.

Then there is my own foolishness:
#6 It has been pointed out by friends across the great divide that my name for the what-ever-it-is that is being proposed by the Common Cause Partners, the "New Improved GAFCON Province in North America," as abbreviated NIGPNA, can be pronounced in an unfortunate and inappropriate way. I did not notice, being too caught up in trying to get all those capital letters lined up to actually try to pronounce the thing. So, whilst banging my own head against the wall (because I’d rather feel pain than feel nothing at all) let me change the title of this new what-ever-it-is to this: the Supposedly Anglican and improved GAFCON Province of North America – SAIGPNA. There it is.
Posted by Mark Harris at 11/19/2008 04:35:00 PM