Giving up stuff, Reconstituting, and otherwise saying good by.

Moderator Robert Duncan, to be installed as Archbishop of the Anglican Church in North America, gave an opening address Monday to the ACNA meeting in Texas. Among other things he had several observations about martyrdom, reconstituting faithful Anglicanism and muscular Christianity. They tell us a lot about the worldview of either the Moderator / Archbishop or the whole of ACNA.

He said, "Many of us have sacrificed a great deal to follow Jesus to this place. Many of us have lost properties and sacred treasures and incomes and pensions and standing and friends."

How true is this? A number of properties and sacred treasures have gone with the realignment group, although for how long in some cases is unclear. Some who left lost incomes, although quite a few, leaving with their parishes, were able to continue. Anyone who leaves the employ of The Episcopal Church stops giving to the Pension Fund and their benefits (which are based on years of service) stop growing. But those who leave do not lose their pensions. They lose the right to continue expanding their pension with the Church Pension Fund. That is precisely why it was wise of the Anglican Communion Network and now ACNA to have a plan in place. As for standing, they left because they thought their standing in what they now believe to be an unChristian entity (The Episcopal Church) was not worth sticking around for. So in all of these elements of martyrdom, the level of suffering is not only less than the glory that is about to be revealed, but for many it is less that as dramatically portrayed. For some the suffering is yet to come as miserable financial times, possible need to return property is determined and salaries are frozen or cut back, or cut out. So how true? True enough, but not in ways that do not also affect people remaining with The Episcopal Church.

We too have parishioners who have lost their parish, treasures, etc. We too have clergy that suddenly are without a job, whose pensions are affected, etc. And, lest we forget, there is the continuing suffering of gay and lesbian members of the Church who still must deal on a regular basis with the results of second-class citizenship.

But this isn't a game of my suffering is greater than yours. In every such struggle there is pain enough to go around. The thing is, when the Moderator calls it out as a special characteristic of the founders of ACNA in these days he is drawing attention narrowly, not broadly. The split off has been caused by and causes suffering in many quarters.

About the last of his list - friends - he is entirely right. We have all lost friends in this mess. One person commenting on a previous blog entry on Distinguished Visitors at ACNA said, "I note that two friends - I hope they still are! - are listed - Bishop Alpha Muhammad and Archbishop Benjamin Nzimbi. One of the sad things about all "divorces" is that they strain friendships." They do indeed. I look through the list of clergy deposed in San Joaquin and see names I recognize, or think about people I know in Fort Worth, or remember my friendship with Bob Duncan, I realize the terrible cost of this sort of mess. We lose friends and connections and they not easily found again. Again, it is not unique to the founding members of ACNA, it is true for us all.

Playing the suffering card does not work.

The Moderator then says, "As we begin – as we gather to re-constitute a faithful Anglican Church here in North America – this drawing together of so many fragments from so many places – the Lord just wanted to remind us about conversion and witness and sacrifice, and about our part in each, for the transformation of others. The work is not over yet, in fact, for us, only just beginning. The giving is not complete yet. The Kingdom has not fully come yet. Like Alban (and the unnamed priest who dared to tell Alban about Jesus) we actually stand at the beginning of something, something that will come to be called Anglican."

At the core of my opposition to ACNA and to the Anglican Communion Network before it is the bold, and I believe amazingly erroneous, proposition that The Episcopal Church, its leadership in particular, have forgotten, displaced, thrown out, or otherwise disposed of the faith "once delivered to the Saints," and in particular to the people who came to be called Anglican. The whole justification of ACNA is that The Episcopal Church is no longer Christian, or barring that certainly no longer Anglican. And that is rubbish. Not very good rubbish either. It is judgmental, condemning, and unworthy the best in the critical efforts to continually reform the Church.

Playing the "I'm Christian, you are not", does not work. 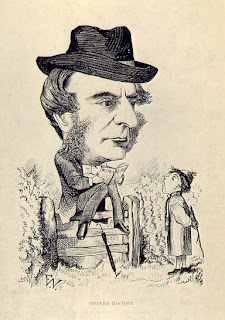 "... Some here will remember the dictums (dare I call them “battle-cries”?) of that muscular Christianity that once reigned in these lands – in Canada and in the US: “No cross, no crown!” “No pain, no gain.” The fugitive priest was ready. The layman Alban was ready. Are we ready? Are we willing?"

The reemergence of the notion of a muscular Christianity is a call to a return to martyrdom, but oddly it is also a call to a kind of strong-man theology, in which if we in America (sorry Canadians and all others of the Americas) just got our bodies in shape we could better reflect the glory that would come to a people whose bodies were as muscular as their faith. We as a Christian nation would perserver. Charles Kingsley seems to have been the great Victorian proponent of this, although he did not like the phrase. (a cartoon of him preaching the word to a young man is to the left.)

Muscular Christianity does not have an unmixed history. It may have spawned the YMCA and basketball and volleyball, but it also produced issue which was decidedly homoerotic, sometimes racists and often picked up by unpleasant people who thought the manly graces, Christian virtues, and the worship of the State all went together just fine. It is decidedly unpleasant to have the Moderator call up this image in his address. Muscular Christianity is filled with the grit and stick-to-it virtues at are clearly manly but also oddly counter intuitive to what we know of many of the Christian virtues.

Having just this week learned the extent to which "no pain, no gain" is false, let me suggest that "some pain, some gain, lots of pain no gain." My knee is swollen having taken on more pain for gain that this miserable body is equipped to handle. As for "no cross, no crown," I thought the whole point of the Cross was a once and for all sort of thing. Perhaps the saying is better, "One Cross, One Crown, many crosses lots of dead people." Oh I know, we all have to suffer, etc. But if our suffering has been taken upon Him, perhaps we need not go in for more suffering to prove our worth. We are worthy not because of our suffering, but because of His.

Well, that's at least how I read it.

I ache for losing friends, but they are lost. I am a member of The Episcopal Church and we are the Anglican Church that is part of the Anglican Communion in this neighborhood. I think muscular Christianity is a really really odd thing to bring up at this time.

Then again, I am not starting a new church either.

I wish the people of ACNA find peace and new grace in being together.

I also hope they understand that we are Episcopalian and we are Anglican and we have no intention of acceding to their judgment of us. We will need to be watchful, for these are difficult times and the wreckage in the fast lane is an unpleasant sight to behold.