Here in Delaware, no surprises 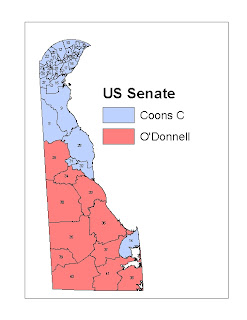 Good Neighbor Elizabeth didn't vote for her. Neither did I.  I voted for Chris Coons. Enough people did so that Delaware went with two democrats, two men. One for the House and one for the Senate. So now we have two senators and one congressperson, all male, white, and from the north of the State (above the canal.)  Enough of my neighbors did vote for Christine O'Donnell so that Kent and Sussex Counties went for her. 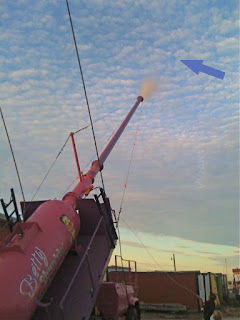 Contrary to popular belief (even in Delaware) this business of "lower, slower Delaware" is false. There is nothing slower about lower Delaware. People hustle a good bit down here and sometimes relax by firing off immense air canons that throw pumpkins a mile down the fields.  In the space of five days Sussex County votes, has something called Return Day in Georgetown where the contestants in various races ride in a parade and "bury the hatchet," and move on, and then has the Pumpkin Chunkin Competition, where the aforementioned pumpkins are hurled through the air. And then it will be back to work for all of us.
My friends at the Riverside Industrial Park, where my boat resides and I have a small studio, are likely to be admirers of Christine not only because she is fairly pissed off at the inadequacy of government and so are they, but because she is a feisty woman who is at least colorful. The guys at the industrial park think that is OK.  They are for strong women, mostly because it takes strength to put up with them. And they, and I, are all pretty sure that any future worth having is filled with colorful, feisty, strong and sometimes pissed off people who can still find time to throw pumpkins.
Those who voted for Christine are not fools and she is not a fool.  As far as I can tell she is not and will not be much of a contributor to a better America for any of us. I am very glad Chris Coons won.  I am also aware that his winning means we have three men in the Federal representative bench, all white, all from above the canal.
So it is another day in Delaware.  The sun is out, it is crisp and cold, and geese are flying. It may work up to be a decent enough day.
Posted by Mark Harris at 11/03/2010 09:18:00 AM