To the President of the Philippines: Release the 43 Health Workers 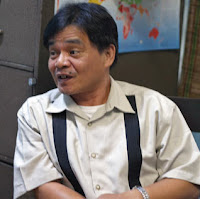 Fr. Rex Reyes, General Secretary of the National Council of Churches in the Philippines, has issued an appeal for signatures on a paid ad to be taken out in Philippine newspapers. I have added my name and I hope there are many that will do so as well. Fr. Reyes is a priest in the Episcopal Church in the Philippines, instrumental in the autonomy of the ECP and the first indigenous person to lead the NCCP. Here is the appeal and the text of the ad:


An appeal from the General Secretary, NCCPhilippinesTo Our Friends and Partners Around the World:Please Sign the Paid Ad toFree the 43 Health Workers (Morong 43)May I appeal to you to please sign the paid ad below. It is calling for the immediate release of the forty three health workers, known collectively as the Morong 43 from continued detention. This issue is very close to us not only because it involves human rights and social justice but also because one of those detained include Dr. Alexis Montes, a member and former national health program coordinator of the United Church of Christ in the Philippines. Dr. Montes was also a member of the NCCP’s Commission on Faith, Witness and Service at one time.To indicate your support, just send your name, position and name of church/organization and send it to pcprnatl@gmail.com on or before November 10, 2010.Thank you for your unwavering support and commitment to our struggle for human rights.Sincerely,(sgd) REV. REX RB REYES, JR.General SecretaryNational Council of Churches in the Philippines(As I post this to you today, we have gathered signatures from around the world enough to fill six blank sheets of standard paper. We hope to have this ad on the major daily newspapers. Please pass it on and encourage others to sign and beat the deadline. Thank you very much.- Rex)_____________________________Another day in prison for the "Morong 43" is another day justice is denied.President Benigno Aquino III should act now and release the Morong 43.Nine months ago in February 6, 43 health workers including 26 women – two of whom have already given birth while in prison – were illegally arrested, searched, detained and tortured. Their rights continue to be violated and their families tormented.The Department of Justice has submitted its recommendations regarding the case of the 43 health workers. The President himself has commented on the defect of the search warrant and that evidence against the Morong 43 are the “fruit of the poisonous tree.” Various local and international organizations have called for the health workers’ release.When Malacanang granted amnesty to rebel soldiers, many asked why the Morong 43 remained in prison.We call on the Aquino government to withdraw the charges against the Morong 43 and see to their immediate and unconditional release!"
Posted by Mark Harris at 11/08/2010 12:25:00 PM