The Anglican Covenant is out there being evaluated, questioned, yawned at, stomped on, dragged through the dirt, and on occasion lauded.  In the last few days we have Pluralist speaking out, yet again, in his usual pithy way on the mutterings from the pro-Covenant crowd. Wounded Bird notes that one of the New Zealand dioceses thinks poorly of it. (She copped it from No Covenant facebook page.) Meanwhile, The No Anglican Covenant Website continues to give a running list of resources on covenant matters. The Chicago Consultation just published a new set of essays on the issues behind the issue of the Anglican Covenant.
On the supporting side there are a variety of papers and commentaries coming out on Covenant-Communion's website (a effort of the Living Church and others). These are mostly lengthy papers full of complex sentences and scholarly sounding opinions. Still, worth the read.
So it is high time to give a reading of the tea leaves. It is high time for the Anglican Covenant Crapshoot, whereby, by guess and by golly, a chart of the impending frightful mess is uncovered, complete with some wild guesses as to the number of National or Regional Churches (that's what Provinces are) willing to buy into the Anglican Covenant, and why.
The handy-dandy pie chart below tells all.
The reasons for supporting the Covenant are:
We need to support the Archbishop of Canterbury, and he is for it.
We have to stay at the table, no matter what. Really.
It's got to be changed, but we can buy on and change it later. (Remember the Bill of Rights?)
We are scared of being thrown out of the Communion, even though they keep saying that won't happen.
And, last but not least, we really really like it.
The reasons for opposing the Covenant are:
It's nonsense and by the way, who cares?
It is too hard on spirit led change agents.
It is too soft on heretics, particularly from the faithless West.
It is not Anglican but something out of Alice in Wonderland.
So, here it is. 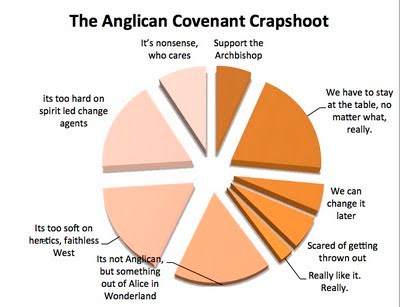 You will note that the Preludium prognostication holds that for various reasons something like 40% of the Churches in the Anglican Communion, or 15 member churches, will vote for it. Of that number only one will really really like it. (I have no notion which one that will be.)  Most of the rest are what we have know in the past as Anglophiles - people who for one reason or another can't bear the possibility that they are not part of England.
The 60% (roughly 23) who are opposed (or will be) to the Covenant are not at all united in their reasons, but Preludium predicts that the group that thinks the AC is not Anglican and the smaller group who thinks it is nonsense will make nice with both the progressive left and the firmly stomp-out-the-heretics crowd and will declare that the nonsense of the Covenant's proposal ( 4.1.6)  that it becomes effective for a church when ever that churches sign on is simplistic and  rot.
The Anglican Covenant Crapshoot is really this: Will the Anglophiles be able to drag the rest of the  Churches into their playbook by shooting craps with loaded dice?  The loaded dice are the two dice - Loyalty and Fidelity - Loyalty to the Church of England's idea of a church of and for the nation, and fidelity to the idea of the Anglican family.  IF family means everything AND we all wish our Churches had the power that we used to think the CofE had vis a vis the state - namely that it was THE church of the State, then we are sunk.
The thing is, the Anglican Communion is a good idea and can be a better idea.  The notion that churches with shared heritage, working within a context where prayer greatly influences belief and ancient truths on important matters are respected, should identify themselves with one another, is a good thing. It can be a better thing, and our common work on how we do ministry and understand mission, how we serve the poor and give voice to more than our own needs, can lead us to new reasons to be glad to be Anglicans. There is good work being done in Anglicanland, and better to come.
But the Anglican Covenant "idea" is not part of that.
The discussion of the Anglican Covenant is a good thing, and I am glad we are having to struggle with the idea. We are talking more about the Anglican Communion these days than ever before.  But in the end the Anglican Covenant will interest not too many, and not too well.
So, there it is. Preludium's gauging of the percentages on the Anglican Communion crapshoot.
To quote the MadPriest, "Of course I could be wrong."