CANA both ACNA and CofN: Well, that answers the question.

The question being, is the Church of Nigeria (Anglican Communion) involved in "border-crossing," a Windsor Report no-no, not to mention a 4th Century and on no-no. The answer is yes.  And, should one ask, "is CANA claiming something never before understood to be catholic practice - namely claiming that its members can be part of two different ecclesiastical communities at the same time?" The answer is "yes" again.

Baby Blue has posted "Annual CANA Council opens." and spells out some of the connections.  She writes, "We're back in Herndon, Virginia this year at Church of the Epiphany for the gathering of churches that are affiliated with CANA, now enjoying dual citizenship in both the Anglican Church in North American (ACNA) and the Church of Nigeria Anglican Communion.  The new primate of all Nigeria - the largest province in the Anglican Communion - Nicholas Okoh is here and Archbishop Bob Duncan of the ACNA will also be here." 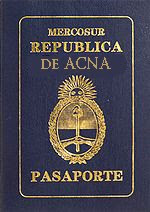 This is an odd arrangement and one that the previous Primate of Nigeria kept claiming was only a passing thing - that the Church of Nigeria was only involved in border crossing until such time as CANA / ACNA could gather in the dispossessed into a new church.  Now granted the preliminary entry point for the Church of Nigeria was Nigerian Anglicans needing a home, along with American Anglicans made, they believed, homeless. So CANA began as a Nigerian thing. But for some years now CANA has been and is an integral part of ACNA, and Nigeria's continued engagement with CANA and ACNA is clearly a violation of the moratorium on messing in other's gardens.

The dual Citizenship thing doesn't work. ACNA is not a fellowship of churches. It is as it's name suggests the "Anglican Church in North America."  Of course it acts as a church when it can, and when it can't it acts as a "fellowship" or a "community of churches."  So one wonders just what canons a new priest in ACNA, arising out of CANA, is under.  To whose "godly judgment" is he or she accountable?

The two passport thing is just crazy. In the first place it reveals a hidden issue: ACNA and CANA folk are still attempting to establish the fact that they are ecclesiastical citizens of someplace at all.  After all the triumphant talk about somehow being "recognized" by the Church of England syond, the end of the matter is that even granted that clergy of ACNA are understood to be "real" priests,  it will be hard to know just where their letters dismissory will come from if they wish to work in England.  They have to come from a bishop of a diocese, presumably one recognized by the CofE as a member church of the Anglican Communion.  OK, so use the Nigerian passport. But wait, how does that work without it being a very clear violation of the general rule of good ecclesiastical behavior? It can't be Nigeria. On the other hand, ACNA or CANA don't exist as Anglican Communion bodies. So: one passport is valid, but under interdict, and the other passport is a pretense.

No that's not going to work. At least that way.

At the same time, let's give credit to ACNA, CANA and the CofNigeria for working up a way by which the shell game can be played long enough for there to be a mind meld in the brains of the weary. If the ACNA, CANA, CofN dance goes on long enough it will almost seem reasonable - why can't one be part of two church entities?  Why can't CANA people claim to be part of ACNA and CofN at the same time?  One is a Province of the Anglican Communion, the other is a wannabe. OK. But those who need the security blanket of knowing they are part of the Anglican Communion even in these dimly lit days can hold on to the Nigerian passport as long as they need to.

Meanwhile, there will be strange papers passed back and forth, and great mutterings of meaningful platitudes accompanied by stamps of approval all around. Doesn't it sound grand?

To ACNA / CANA's credit let's also notice their challenge of 1000 new Anglican Congregations.  At least they are working at something worth the effort.  Now...let's see what we in The Episcopal Church can do to further that end.  If ACNA / CANA can't do it alone, maybe we just ought to get out there and do new start-ups as well.