Haiti, Debt, the Covenant with TEC, and the challenge of the days ahead

The January Earthquake seems a long time ago now, and that is the problem. Just as the oil-gush (it ain't a spill) has gotten to be old news, so the devastation of the earthquake had moved from being first page news, to almost no news at all. But there are things stirring:

Debt Relief:   Today it was announced that the International Monetary Fund is forgiving debts of some $268 million and providing loans of over $60 million to cushion the fluctuations of the value of local currency with the influx of lots of US and world aid. France has finally canceled the remainder of the debt it claimed as a result of losses in Haiti's move to independence. In a way these are remarkable events, but very late in Haiti's history. Debt has always been a major player in Haiti's woes.

Freeing up funds and gathering more from the international community is absolutely imperative for the future of Haiti following the earthquake. Everyone in Haiti will benefit on some level, if only because more money is moving about and there are better roads and infrastructure in place as a result of big spending for recovery.

The Renaissance of the Church: The Episcopal Church and indeed churches throughout the Anglican Communion, and Anglican related churches, have given for relief, but rapidly it is becoming clear that giving for renaissance, for rebirth, of the Church must rest in Church hands.  It is the Church giving to its own body that must replenish the Church's own presence in Haiti.

A good beginning has been made in replenishing the Clergy, Lay Leaders and their families through a program, "Strength for the Journey" underwritten by the Church Pension Group and CREDO, and a number of other agencies and churches. Now with leadership revived from initial issues of trauma and stress it is time to turn to the rebirth of the Church on a physical and spiritual level.

That work too is underway. Nothing in Haiti is static, as if all was waiting for someone (TEC, the Anglican Communion, whatever) to act. Churches, schools, hospitals, clinics, the seminary and other agencies of the Church are at work, often in very temporary settings, but they are at work. There is a Haitian designed master plan for rebuilding in the making, there are parishes working in partnership with churches in the US and elsewhere to continue special projects. There is, in other words, the living, breathing body of Christians that is The Episcopal Church in Haiti. 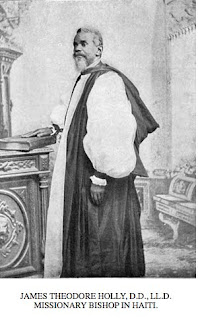 The first vision, that of a church in Haiti that would in time become its own province, or national church, was clear in the Covenant of 1874 under which terms Bishop Holly was selected and ordered for episcopal ministry.  It is a Covenant worth the read, for it is a reminder that the promise of 1874 was not realized, has not been realized, and remains to be fulfilled. It is a reminder that when we give for the work of the CHURCH IN HAITI we are at least in part giving for the vision that first motivated the Covenant between the Protestant Episcopal Church of Haiti (which became after Bishop Holly was made bishop, the Orthodox Episcopal Church in Haiti) and The Episcopal Church.

When we give for the rebirth of the Eglise Episcopale d'Haiti let us give for its true rebirth - as a province in the Anglican Communion in the making, whose privilege it is for TEC, of which the current diocese of Haiti is part, to urge its emergence.

May the Eglise Episcopale d'Haiti increase and be reborn anew!

Here is the Covenant text:

COVENANT.
In the Name of the Most Holy and Undivided Trinity, Father, Son, and Holy Ghost. Amen.

Art. 2. The House of Bishops, acting under the aforesaid Article 10 of the Constitution of the Protestant Episcopal Church in the United States of America, and availing itself of the concession made to them by the Protestant Episcopal Church in the Republic of Haiti in the stipulation contained in Article 5 following of this Covenant, will designate and consecrate to the Office of Bishop one of the Clergymen of the aforesaid Church in Haiti (making selection of the said person according to the best of its godly judgment as to his fitness and qualifications for such a high and holy vocation).

Art. 3. The said House of Bishops furthermore agrees to name from among its own members a Commission of four Bishops, with whom the aforesaid Bishop or Bishops to be consecrated for the Church in Haiti shall be associated. And this Commission shall form a temporary Board of Administration for the Episcopal government of the Church m Haiti. And as such a majority of the same, shall be competent to take order for the designation and consecration of future Bishops in Haiti, as the necessity may arise, on the demand of the Convocation of the Church in that Republic. The said temporary Board of Administration shall be furthermore empowered to administer all the discipline pertaining to the Episcopal order of the Ministry for the Church in Haiti until at least three Bishops shall be designated, consecrated, and canonically established in said Church. It being understood that this Commission of Bishops shall be governed in the exercise of their Episcopal administration, judgments, and acts by the provisions contained in the Constitution and Canons of the Protestant Episcopal Church in the United States of America, so far as the same can be applied to the divergent circumstances of the Church in Haiti.

Art. 4. The Protestant Episcopal Church in Haiti on its part agrees always to guard in all their essentials a conformity to the doctrine, worship, and discipline of the Protestant Episcopal Church in the United States of America, as the same are set forth in the duly authorized standards of the said Church, and that it will not depart therefrom any further than local circumstances shall make it necessary.

Art. 5. The Protestant Episcopal Church in Haiti further agrees to concede to the House of Bishops of the Protestant Episcopal Church in the United States of America, the choice of its first Bishop to be consecrated; and thereafter to concede the same prerogative to a majority of the Commission of Bishops forming the temporary Board of Administration to choose or designate among the Haitien Clergy future Bishops on the demand of the Convocation in Haiti. And this prerogative shall continue until in the good Providence of God three Bishops shall be canonically resident and exercising jurisdiction in the Church of Haiti. Then this prerogative shall cease on the part of the aforesaid Commission, and all its functions revert to those three Bishops thus established in Haiti.

In testimony whereof these Articles have been signed in duplicate, on the part of the House of Bishops, by the Bishops appointed for that purpose, and on the part of the Convocation of the Church in Haiti, by its Dean," who has exhibited duly authenticated credentials clothing him with full power to act in this matter in the name and in the behalf of the Convocation aforesaid.

Done in the City of New York, on the third day of November, in the year of our Lord one thousand eight hundred and seventy-four.